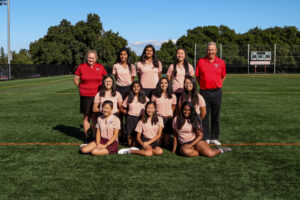 The Santa Clara Valley Athletic League (SCVAL) recently changed the sports calendar to allow non-contact sports, including girls’ golf, to start practicing on Feb. 1. The delayed and shortened season will last through March 26.

Since the team lost four starting players to graduation in 2020, the season will be tougher than usual, coach Dave Gragnola said.

“While the team did well last year, finishing in second place, most of the other teams in the De Anza division retained four or five out of their six starting players for this season,” Gragnola said. “We have two.”

According to Gragnola, the team’s lack of returning members will likely leave them and Los Gatos vying for the last non-relegation spot in the De Anza division — like Saratoga, Los Gatos only has two returning starters. If either team finishes in last place, they risk falling to the lower El Camino division during the 2021-2022 season.

This season, no sports will be having playoffs beyond a league finals tournament, so advancing to CCS is not on the table.

“We hope to finish well in the regular season league standings and make a good showing at league finals for sure, but not knowing who will be comfortable coming out to play this year makes that more of a guessing game,” assistant coach Micah Hall said.

The team will be led by the only two returning members of the six players on last year’s traveling team: junior Savannah Lin and senior Jane Loo.

Other returning players that will compete for a travel spot are sophomore Ananya Seth and seniors Kristen Hung, Iris Lee, Melody Li and Ananya Sekharan.

Hall said he is uncertain of how many freshmen will be trying out due to the pandemic, but he expects at least one freshman, Alicia Nguyen, to be a travel team player.

Gragnola said having new players is helpful, but they must prove that they can perform under pressure.

Hall’s goal for this upcoming season is to facilitate a safe and responsible return to school sports, with an emphasis on getting everyone to abide by safety guidelines and protocols.

“A successful season would be us keeping everyone safe and healthy while being able to resume school sports activities,” he said. “Anything beyond that would be icing on the cake.”

Since Lin will be the only experienced traveling player returning to the team for the 2021-2022 season, Gragnola also hopes to prepare new players for the next season.

“This year will be an important year to get the new players going so that the team can compete in 2021,” Gragnola said.