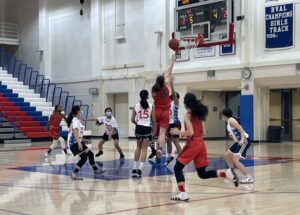 Photo by Kathy Tippetts
Junior post Mika Tippetts drives in for a floater in a scrimmage against Independence on Nov. 18.

Recap: While the Falcons made it to CCS last year, they opted out due to seniors leaving and people going out of town. The team finished 6th in the De Anza league.

After a challenging 19-4 second quarter, the girls’ basketball team lost 58-49 at their first scrimmage against Mt. Eden on Nov. 16. Despite their first loss, key starters like junior guard Tanya Ghai — who scored 21 points, 5 assists and 7 steals — performed strongly, leading to a 34-27 win against Independence on Nov. 18. The team hopes to work on consistency and decrease the number of fouls and turnovers for their upcoming games.

This season marks the team’s third coach over the past three consecutive years: Coach Josh Rivera, who coached the JV team during the 2019-20 season, was hired as this season’s varsity coach.

“When I first met some of them, they were freshmen — and now they’re juniors,” Rivera said. “But the other additions to the team range from returning seniors to freshmen, so it’s a mixed bag.”

Rivera’s hiring follows the departure of coaches Danny Wallace and Jaclyn Brode after the 2019-20 and 2020-21 seasons, respectively. Wallace retired after 13 years of coaching, and Brode left to be head coach at Castilleja after her one-year stint at SHS.

Though many of the players are familiar with Rivera already, the team will still take time to transition.

“Every year it’s been different coaching styles, different plays, a different vibe,” senior post Amarangana Tyagi said. “It’s hard to adjust, but all the girls have kind of been the same throughout, so that makes it easier.”

The team started daily practices with a finalized roster starting Nov. 8 following tryouts the week of Nov. 1. Nearly half the team is composed of underclassmen to replace the losses of alumni Bereket Bailey, Iris Lee, Jane Loo and Athena Mahajini to graduation.

Due to these key losses, Tyagi feels uncertain about the team’s prospects this year due to “a lack of height.” The number of posts on the team has gone down from four to five to just two: Tyagi and junior Mika Tippets.

Considering the team’s lack of experience, Rivera said the team is working on building chemistry and finding an identity. Through their practices, Rivera feels that they are reaching a competitive balance.

The team plans to focus on practicing for themselves rather than looking at matchups.

“In the past, we used to do a lot of scouting and we would sit through and see who we were playing against, who their good players were and how they played,” Tyagi said. “But this year is kind of all up in the air because of COVID-19.”

Nevertheless, junior guard Tanya Ghai is optimistic about the team’s standing this year, as many other teams face the same obstacles.

“Last season, we were adjusting to a new coach and we didn’t win very many games,” Ghai said. “I’m feeling pretty confident about our ability to win games this year, because all teams are kind of restarting and all their seniors have graduated.”