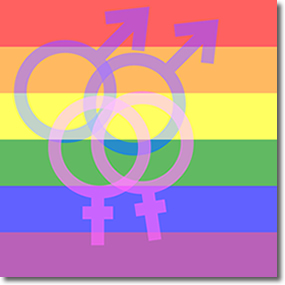 Homosexuality is a social issue hotly debated in America

Meet Dave. He is a friendly and hard working student at Saratoga High who receives good grades in school and shows an enthusiasm for extra-curriculars. Dave also happens to be gay.

Meet Dave. He is a friendly and hard working student at Saratoga High who receives good grades in school and shows an enthusiasm for extra-curriculars. Dave also happens to be gay.

Dave was in his SAT prep class during a discussion about essay topics when the talk turned to one about role models and their positive and negative qualities.

“I brought up Dumbledore,” said Dave, “and so a kid stood up and said ‘yeah, he’s a positive role model, helping kids and all that. But then again—he’s gay.’”

Since he is a gay student, it would have been perfectly justified if Dave had jumped up in outrage or perhaps engaged in verbal debate about bigotry in response to such a comment. But he is not a hot-tempered, quick-to-enrage person. “I don’t think it was meant in a mean way,” said Dave. “The guy was just…ignorant.”

Gay students like Dave experience this kind of careless flippancy and discrimination regarding their orientation almost every day. Some handle this by holding up picket signs and aggressively promoting equality for all. In this regard, Dave is different. He stands for the same ideals, but in a quieter way. He strongly disagrees with homophobic ideas but tries to understand them. He tolerates those who condemn his own identity because he would like the same tolerance in return.

The recent passing of Prop 8, which bans marriage for gays in California, was disheartening for Dave.

“I’m mostly just disappointed,” he said, and for a split second, his face fell. “I mean, I knew there was a good possibility it would pass. But then I had thought [and] hoped that people in California, at least, would be smarter, you know?”

Dave looked down for a minute, but then smiled, as if to reassure that, although a pivotal battle may have been lost, the war is far from over.

“I’m not angry,” he said quickly. “Because I know that, inevitably, something will be done. It has to.”

Dave has certainly not lost faith, even after a majority of citizens in the state he lives in voted against his right to marry some day. He has not lost faith in the ability of his fellow Californians and Americans at large to rethink their beliefs about right and wrong and make a positive change. He looks toward a silver lining, noting the progress that America has already made.

“The Bay Area is much more liberal than other parts of the country,” he said. “Especially Saratoga—everyone is really good when it comes to gay students.”

However, for gay individuals living outside of the Bay Area, Dave finds it disturbing to think about the students living in places where homosexuality is considered to be socially and morally unacceptable.

“It sort of makes me feel for the kids who don’t have the support I have here,” said Dave. “It must be really hard for them to get through the day.”

As for being gay himself, Dave acknowledges that while one would assume his rights are significantly inhibited, support is widely available.

“I guess I’m pretty lucky. My friends are really cool about everything—really supportive. I don’t really get that many negative [vibes] from anyone,” he said.

He had support and help from his friends, but Dave had just one more obstacle—coming out to his parents.

“I haven’t told my mom yet,” he admitted. He had, however, approached his father. “He didn’t handle it too well at first,” said Dave. “He thought that I was just an impressionable kid who didn’t know what he was talking about. How could a 17-year-old know anything about anything? [But] this was something I knew for sure, something that was so much a physical part of me—how could I not know?”

However, it wasn’t so much the disbelief that upset Dave. “It hurt to look at his face and see the pain that I had caused him,” said Dave. “‘Don’t tell me that,’ [his father] had said. ‘Please don’t tell me that.’”

“I realized that he was mainly worried that I wouldn’t have a happy life,” said Dave. “I was too impatient earlier—I needed to give him some time to work things through. I was his son and he loved me.”

To Dave, that was really all that mattered.

On a broader note, Dave thinks there will always be discrimination against gay individuals. But it will get better—he is sure of it.

“Everyone is connected. Gay people are…everywhere,” he said, raising his hands to demonstrate. “It doesn’t matter, being a man, woman, black, white, or Asian. Things like that don’t matter.” Dave paused, trying to put into words the things he had gone through. “You really have to be careful of hurting someone. You just…you just don’t see it. People will say that they don’t know anyone who is gay, so they’ll be like ‘Oh, it doesn’t matter to me,’ right?” Dave shook his head, and one could almost feel his outrage, his hurt. “But it really does [matter],” he said, his mind impossible to read behind that forgiving smile. “It should.”