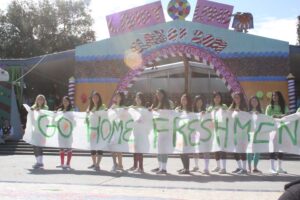 Chutes and Ladders. How do you make a quad day out of that?

This was the problem the freshmen faced during their Homecoming quad day this year. Ultimately, they decided to parody this dilemma in their performance, which surprised many students with its preparation and dancing. The freshmen started strong with their all-guys dance, followed by two girls dances. The freshmen boys caught on to the Homecoming dance style quickly, including lots of hip thrusts and fist pumps in their routine.

In the first girls dance, they dressed up as nerds playing Chutes and Ladder. In their second dance, the freshmen held up a banner showing off their class spirit. Some of the songs didn’t tie in with the theme, but managing to perform a full performance off of Chutes and Ladders was a feat in itself.

Considering the lack of experience on the part of freshmen, class president Nikhil Goel thought the performance went well.

“The freshman class actually had a very good freshman quad day,” Goel said. “It was organized, rehearsed and creative.”

Many of Goel’s classmates were also pleased but also felt it could have been improved.

“Our quad day was planned out pretty well, but a few things could have gone better,” freshman Stephanie Chu said.

One problem was that it was hard to hear anything. “We should have tested the mics to make sure they were loud enough,” Goel said.

Freshman Patrick Wang said his favorite part of the quad day was the dancing.

“We practiced dancing for our quad day for about 10 to 15 hours,” Wang said.

Despite a theme that Goel called “terrible,” the freshman were able to put on a cohesive and choreographed show.

“We used [our theme] to the best of our ability,” said Goel.