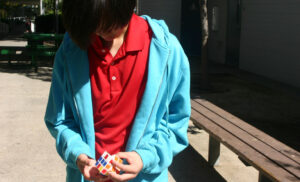 Many students remember the legacy of Andy Tsao, who set a continental record for the Rubik's Cube while in school here. Now that he has graduated and gone on to MIT, many people have lost interest in the colorful puzzle. However, freshman Edward Lin has gotten students intrigued once again.

Many students remember the legacy of Andy Tsao, who set a continental record for the Rubik’s Cube while in school here. Now that he has graduated and gone on to MIT, many people have lost interest in the colorful puzzle. However, freshman Edward Lin has gotten students intrigued once again.

Almost everyone recognizes the classic Rubik’s Cube: a 3×3 cube with colored stickers on each side, where each face can be turned to mix up the colors. Lin is not only one of the world’s fastest solvers of the standard cube. He is also recognized for an assortment of other puzzles, including different sized cubes from 2×2 up to 7×7, as well as other oddball shapes.

Just like Tsao, Lin attends many competitions to compare himself to others and in hopes of setting records. He has been to competitions at MIT and in Germany, as well as many local ones. His fastest competition time for the 3x3x3 is just 9.77 seconds, one of the top 20 solves in the country, while his fastest practice time is a lightspeed 7.4 seconds.

“Last time I saw Edward, at the US Nationals at MIT, I was about a second faster than him on average,” said Tsao. “But I don’t have the time to practice much anymore, and he’ll probably pass me soon.”

Besides the 3x3x3, two of Lin’s favorite puzzles are the 2x2x2 cube and the Pyraminx—a Rubik-esque puzzle shaped as a tetrahedron. Lin’s time of 1.36 seconds for the minicube is 13th in the world, and he holds the continental record—which is also second in the world—or the Pyraminx, clocking in at 2.88 seconds. He can even solve it with his feet—no records there yet.

“He competes in a lot more events than I do, and he’s pretty good at them,” said Tsao, now a sophomore at MIT. “I just stuck to the 3×3 and 4×4 competitions.”

Lin attributes his initial interest in the puzzle to his friends at Challenger Middle School two and a half years ago, most of whom already knew how to solve the cube.

“A lot of my friends knew how to solve it,” said Lin. “I wanted to learn how to do it as well.”
He memorized the algorithms for a beginner’s method in one day and solved his first Rubik’s Cube in under 3 minutes. Gradually, he practiced more and learned faster methods, often using online videos to learn new algorithms and fingertricks. He now uses the Fridrich method, which is used by the majority of the world’s fastest “cubers” and involves arranging the pieces into their correct position layer by layer.

“Before I started, I remember seeing YouTube videos of people [solving the Rubik’s Cube] and thinking to myself ‘if I ever learn it, I want to be really fast,'” said Lin.

Now, after only two and a half years of cubing, Lin has more than accomplished that goal. But with academics to worry about, Lin has lost some of his free time.

“I used to practice a few hours a day, but not that much anymore because of homework,” said Lin. “I think of it mostly as having fun.”