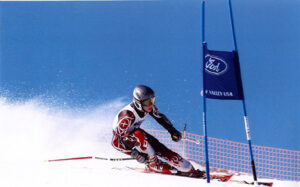 With a skillful lunge, he flew out of the start and down the run skillfully maneuvering to the finish.

Tidd, a competitive skier since age 10, qualified for the Junior Olympics this year and competed in the first round of the competition in Idaho in March.

According to Tidd, there were nine qualifying races: Three at Mammoth, three at Squaw, and three at Sugar Bowl. In order to advance to the Junior Olympics, you needed to do well in six of those nine races. Roughly 25 from his age group were chosen.

Despite his many other accomplishments, Tidd holds this one above all the others.

“I think that making the Junior Olympics this year is definitely my biggest accomplishment,” said Tidd, “although I would have liked to have advanced further in the competition.”

Tidd learned to ski at age 2 and has been training ever since.

“Some of my family friends from Bear Valley started [skiing] and my dad kind of got me into it, so that’s how I started,” said Tidd.
Tidd competes in four events: the Slalom, Giant Slalom, “Super G” (Slalom) and Downhill.

“Slalom is really short radius turns where you see people hitting the gates down, the panel-type things we have to go through, and downhill is the one where you see professionals going really fast down the run,” explained Tidd.

Tidd has lived at Tahoe every winter since eighth grade so that he can train every day. There he attends The Forest Charter School, where he chooses how many classes he takes.

“I take three classes at the school and do the rest as independent study,” said Tidd. “There, I ski every morning, go to school in the afternoon and then go home and do my independent study work.”

When he is at Tahoe, Tidd participates in a competition roughly every other weekend, either in competitions for his age group or open competitions in which anyone 13 or older can participate. Both of these competitions can have anywhere from 50 to 150 participants.
Tidd came back to Saratoga High on May 4 and is waiting to resume his training.

“I’m going to a camp this summer at Mt. Hood in Oregon and plan to live in Tahoe again next winter,” he said.