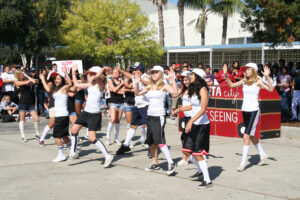 Hundreds of students crowded around the cafeteria-faced end of the quad and waited for the long-anticipated freshman quad day to begin on Sept. 30. Some came looking for an opportunity to laugh at and mock the freshmen, and while many got what they came for, others found themselves impressed with parts of the show.

Hundreds of students crowded around the cafeteria-faced end of the quad and waited for the long-anticipated freshman quad day to begin on Sept. 30. Some came looking for an opportunity to laugh at and mock the freshmen, and while many got what they came for, others found themselves impressed with parts of the show.

The event began with freshman band members performing a classical rendition of Usher’s “Yeah!” and “The Star-Spangled Banner.” By their second song, freshmen were experiencing difficulties in keeping their show going.
As the songs came to a close, a group of girls dressed in tank tops and hats picked up the show with a short dance battle choreographed by freshman Isabelle Albert. Freshman Megan Kao followed with an eye-popping solo. Kao, who has danced since she was 4, blew the crowd away with a hip-hop routine that got the audience riled up.

“I didn’t know what to expect when she came out, but she definitely stepped up to the plate and delivered,” said sophomore Anthony Sutardja.

It wasn’t too long, however, before the freshmen found themselves stalling in the transition to their next act. After Kao’s performance, the freshmen recited facts about Atlanta, hoping to keep the crowd engaged. The audience, confused by the delay and anxious to get back to lunch, stood up and vacated the area before the freshmen had a chance to continue the show.

“I had high expectations because the freshmen seemed so confident,” said Sutardja, “but I was disappointed with the actual turnout of the show.”

What the freshmen weren’t able to present after the solo, however, was a prepared skit dedicated to commemorate Martin Luther King Jr., the Atlanta-born icon.

“We didn’t realize that the whole [quad day] was supposed to be informal,” said freshman class president Anshuma Siripurapu.

Several freshmen involved in the quad day were upset with their overall class participation.

“I think the dancers did a really great job,” said Albert. “It’s just that other people didn’t do their part so it didn’t turn out too well. I don’t think the other freshmen knew how big of an event this was, so hopefully we will get more people to help out next year.”

“I was very disappointed because [the freshmen] had planned a very good activity,” said Rodriguex. He said there were some leadership issues that contributed to the problems.

Despite the complications and occasional but inevitable boos from the crowd, some freshmen were still resilient and satisfied with their work and acknowledged the difficulty of their first Homecoming quad day.

“We didn’t really know what we were supposed to be doing, but in the end we just did what we had to do,” said Siripurapu.