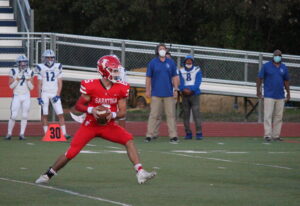 Senior quarterback Grant Petters winds up to launch the ball down the field during the senior night game against Los Altos on March 27.

Seniors reflect on the highs and lows of their last season of high school football.

On April 9, the football team came back from a 20-7 deficit against Fremont and sealed a 25-22 win. COVID-19, however, proved to be a tougher opponent. A Saratoga team member tested positive for the virus on April 12, forcing the team to quarantine for 10 days and forfeit the last game of the season against Westmont.

The team wrapped up its season on April 16, finishing third in the league with a record of 2-3 with victories against Los Altos and Fremont and losses to Gunn and Cupertino.

Despite the truncated season, senior quarterback Grant Petters managed to meet some of own goals for the season. He maintained a completion rate of over 50 percent each game and finished with a quarterback position over 100. He was also named a Weekend Star by the Mercury News.

Because of the Santa Clara Valley Athletic League Board of Managers’ decision to forgo postseason play this spring, the athletes found that the team was slightly unmotivated due to the less competitive nature of the season.

“It was very laid back since we were not competing for any titles, which seemed to take away some motivation for the players,” Petters said. “Overall, I had fun competing with my team one last time, but I just wish it was for more than four games.”

Senior wide receiver Ryan Gilligan, who finished in the top 10 for CCS and third in the league for receiving yards, felt that the team’s win against Fremont made the difficult season a memorable one.

“Being able to score the winning touchdown in my last game ever will be a great way to end my football career,” he said.

The canceled game was a disappointing conclusion for the seniors, in spite of their two victories. However, the athletes said they are grateful they had a chance to play this year.

“I think that our team came together and played really well,” Gilligan said. “We went through a lot of ups and downs but in the end we ended on a high note with a great win against Fremont.”