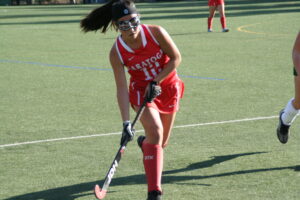 Inspired by her older sister, junior Olivia Kinoshita first started playing club field hockey in sixth grade. From there, she would continue to play the sport for the next 6 years.

After playing with the high school freshmen for her first two years, Kinoshita joined the Redwood Middle School field hockey team in eighth grade with juniors Rima Christie, Lauren Yarrington and Lauren Vandervort. After enjoying their season, they all decided to keep playing at the high school level.

Kinoshita, who plays left fullback, said the team has received many mixed messages about starting their season and what it might look like.

In addition, the team also found out that their old coaches, Nanu and Kam Sidhu, stopped coaching the team. Both started attending dentistry school in the fall; the lack of a coach prevented the team from practicing in the fall when it would have been possible.

While Kinoshita considered playing the sport in college her freshman and sophomore year, she is now rethinking her decision because of the pandemic.

“I was planning on playing [in college] last year because I signed up for a travel program,” Kinoshita said. “But then, with COVID, everything has shut down, and I haven’t been motivated to keep going at it enough to actually have colleges recognize me.”

Although Kinoshita misses seeing her friends every day at practice, the most important aspect of field hockey she misses is the structure the sport brought to her life. Because Kinoshita would finish school, go home to eat a snack and do some homework, go to practice and then come back home, she always felt her days were efficient,meaningful and fun.

“I think I’m definitely disappointed because it was just something so routine,” Kinoshita said. “I also just got to hang out with my friends every day, and I liked to stay in shape.”

Despite the uncertainty of whether the team will reach the field this school year, Kinoshite is already looking to the future. If the sport is cleared to play normally in the fall, her main goals are to get to know their coach, re-learn skills and plays, and teach the freshman and sophomores the game.

Since the team will lose five members from the Class of 2021 next year and many of the other members have little to no experience in the game, Kinoshita said it will “be a really big building year.”

Because every sport will essentially have two new classes to teach, Kinoshita anticipates the majority of freshmen and sophomores will join JV to learn how the sport works. As the 2021 season nears, she plans to help host a few summer practices in an effort to accustom the new players to the sport.

“When we finally get back to playing field hockey, it’s definitely going to be a building year, but I’m OK with that,” Kinoshita said. “I think I can speak for everyone when I say I just want to get back on the field and feel like a team again.”