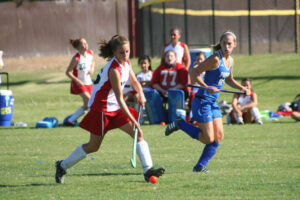 Saratoga field hockey opened the pre-season in style on Sept. 2, with a dominating 5-0 non-league win against Prospect on their home field. Goals were scored by seniors Kelly Darchuk and Claire Marsh, junior Anna Schroeder and sophomores Ren Norris and Kathryn Nobles. Sophomore Vanessa Block had an assist, along with Darchuk with two assists. The Falcons started with a goal in the second minute of the game as Block crossed the ball to Darchuk to score, and they never looked back.