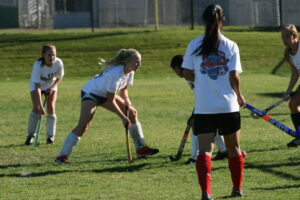 Having competed in the playoffs every year since 2000, field hockey has consistently been one of the school’s strongest sports teams. This season, however, with key losses early in the season, and the injury of senior attacker and co-captain Vanessa Block, the team may not even make it to the CCS playoffs.

At an away game on Oct. 14 against Gilroy, the Mustangs came away with a 2-1 victory against the Falcons after managing to score two early goals. Senior forward Whitney Hansen scored the lone Falcon goal late in the second half, hoping to spark a comeback.

During the match, while Saratoga was defending a Gilroy short corner, the ball hit Block’s right thumb and broke it in four places. As a result, Block will be out for at least four weeks to recover. Having played on varsity since freshman year, Block has been an impressive, high-scoring offensive player and an influential leader, said assistant coach Amber Wilson.

“If the team dwells on the fact that [Block] is out and thinks that’s a huge blow, then it will be a huge blow,” said Wilson. “In the Gilroy game we scored without [Block] in, and that was against an undefeated team. We would love to have [Block] in, but if the team steps up to the challenge we can still do it.”

The setback is troublesome for the team, and especially for Block.

“It’s really upsetting and disappointing that my season is cut short,” she said. “I’m definitely going to try to stay in shape so I can maybe return for the last few games, but it is definitely a major letdown.”

The injury seems to have come at the worst time possible. Before the loss to Gilroy, the team had a disappointing 2-0 loss on Oct. 12 to Leigh, a new team to the El Camino division.

On Oct. 7, the team managed to tie with Presentation 1-1, when sophomore midfielder Amanda Schwartz tipped in a goal early in the game, but Presentation responded with a goal in the second half.

“The season hasn’t been going the way we wanted, score-wise,” said Wilson. “We had great play at certain times, but we just had bad luck and couldn’t get the ball in the goal. The games were lopsided—we’d dominate but we couldn’t score.”

The team’s first win of the season was against Los Altos on Oct. 21, when the girls pulled off a clutch 2-1 win, with goals by senior co-captain and center midfielder Ren Norris and junior forward Annie Barco bringing their season record to 1-5-2 However, the team is still feeling the pressure. To make it to CCS the girls need to beat Los Altos, Presentation, Leigh and one other game, all without Block’s help.

“Skill-wise we are all there because all of us are really good players,” said sophomore forward Megan Doles. “It just comes down to working as a team and getting intense for these important games—it is definitely possible for us to go to CCS.”

Norris along with sophomores Jenni Miller and Hannah Johnson, have all stepped up in the absence of Block, said Wilson.

Block, who has been recruited to play for several Division 3 colleges in the East Coast, says her injury will be healed by the end of this year and should not affect her future in the sport.

“I’ll still be on the side leading and cheering them on,” said Block. “We have a lot of strong players, and they are improving as a team so we still have a shot at CCS.”