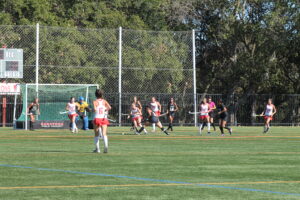 Permalink
Varsity faced a tough season due to the need for JV players as substitutes.

The Falcon field hockey concluded its season on Nov. 2 with a 2-1 loss to Prospect in the second round of CCS. They had advanced to the game after getting a bye in the first round.

The team faced more competitive teams this year after moving up from the less competitive El Camino. Adding to their difficulties was trying to keep a fully stocked roster. Throughout the course of the season, two varsity athletes were injured, Emma Green and Lucy Campbell, and four JV players were called up to substitute for injured players.

Sophomore defender Solbee Lee said she was anxious when she was asked to substitute for varsity two weeks into the season, as she felt pressured to play at the same level as the more experienced senior athletes. However, with lots of support from her teammates, Lee was able to quickly adapt.

“The more we practiced together, the more comfortable I felt. I was still confused at times, but I’m definitely more relaxed to make mistakes with them,” Lee said.

At the start of the CCS game, the team had high hopes to win. Once Prospect High scored two goals, however, the team’s energy and confidence plummeted, hindering their ability to score. But with encouragement from their coaches and the upperclassmen, the Falcons were able to keep up their defense to prevent Prospect from scoring more goals.

“Most of us, especially the seniors, gave it their all because it could’ve been our last game, and it was,” senior center forward Willie Kuiper said.

The team’s ultimate goal for this season was to form good chemistry. A particular activity the team enjoyed together was dressing up as their coach, Sharma, for Halloween, allowing everyone to spend time together.

By keeping their spirits high and trying their best every game, the players were able to improve together and develop new techniques.

“We used this method called transition, where we return the ball from one side to another. We normally don’t do that, but we performed that technique pretty well during that game against Prospect,” Lee said.

Throughout the season, the team had to deal with many setbacks, with a number of athletes occasionally out. Due to the cold weather, illnesses were common. Finger fractures also occurred often due to the nature of the sport, with players’ hands close in proximity to the puck and stick.

With the loss of eight key players to graduation, injuries throughout the season and movement of JV players pulled up to varsity, the team had to adjust to ever changing circumstances and lineups. Players were able to develop trust and rely on each other during games after many practices together.

According to players, key players such as senior center midfielder Georgia Adams and senior center forward Willie Kuiper contributed a lot to the team’s performance.

“Georgia could basically do anything, so we called her the ‘Ace.’ If you missed a shot [during a game], then Georgia or Willie would be there to help and back you up,’ Lee said.

The key players’ constant persistence of help allowed the team to feel more comfortable and trust each other during games, allowing their matches to flow more smoothly.

“We all learned how to keep fighting until the end by staying focused even if we’re losing,” Kuiper said.