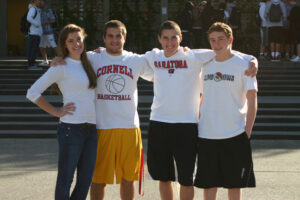 The Lagemanns, Johnsons, Ruff, and Marr are all cousins.

They are all part of a long list of relatives who have dominated athletics at Saratoga High in recent years. The Lagemanns, Johnsons, Ruff, and Marr are all cousins.

Their sports tradition began with Augie in 2002 when he entered the football program. Nine years and five relatives later, the family is still going strong.

“It’s awesome,” said Greg. “I’ve been blessed to have so many people in my family have such a strong connection through sports.”

The family has always enjoyed sports and gets together to play during family gatherings. Sports have served to bridge the age gap between the family members and have allowed the kids to become closer and have more things in common with each other, Greg said.

“Our age groups are so spread out that when I was younger the older kids were forced by their parents to play with us,” said Greg. “But now that we’re older, we all play together and have a great time.”

“We play a lot of video games but mostly sports. It’s great to have a family that loves playing sports so much,” said Ruff.

Not only do the casual games entertain the family, but they also help the younger ones improve their athletic abilities by giving them advice on improving their game and physically challenging them.

“We sometimes ask them what it’s like to play college sports and we pick their brain for ways to get better,” said Ruff. “Plus it’s even more competitive for the younger kids when they’re going up against college football players.”

Even though they may compete hard in pickup games, they are still a family “who always support each other,” said Greg. With such a tight-knit family comes the great sense of pride.

“I really enjoy being able to say ‘he’s my cousin’ or ‘she’s my cousin’; that type of stuff makes me really proud to be a part of this family,” said Ruff.