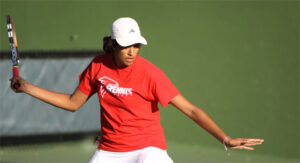 No. 1 singles player Mika Padmanabhan returns a shot from the Matadors' Sylvia Li.

For the first time in school history, the girls' tennis team became the CCS champions. They defeated archrival and No. 1-ranked Monta Vista at the Courtside tennis courts by a score of 5-2 on Nov. 18. Keying the victory was the team's ability to win all of their first sets except for one match.

For the first time in school history, the girls’ tennis team became the CCS champions. They defeated archrival and No. 1-ranked Monta Vista at the Courtside tennis courts by a score of 5-2 on Nov. 18. Keying the victory was the team’s ability to win all of their first sets except for one match.

The No. 3 singles player sophomore Crystal Yen was the deciding match, defeating Melissa Kobayakawa 2-0. No. 1 singles player Mika Padmanabhan also won 2-0 in a second-set tiebreaker against tough opponent Sylvia Li. Meanwhile, all of the doubles teams won their matches. In the previous two matches this year against the Matadors, the Falcons had lost 4-3.

Players are excited about this upset win against a team that has consistently edged out the Falcons in recent years, and they are looking forward to playing in NorCals Nov. 20 and 21 in Oakley, where they could face Monta Vista once again—this time with the Northern California championship on the line.

The team at first received the No. 3 seed in CCS behind Monta Vista and Mitty. They were excited about their seed due to the match up against Mitty in the semifinals.

“Our league is by far the toughest league to compete in with three out of the six teams seeded top six in CCS. No other league has as many teams capable of qualifying for CCS as ours,” said head coach Tom Uyehara.

The team defeated Sacred Heart in the first round of CCS 6-1 on Nov. 11 and beat Homestead in quarterfinals 7-0 on Nov. 13.

“I thought that we did really well against Sacred Heart, especially because some of us haven’t played with each other before and we were really relaxed during the match,” said Edman.

In the semifinals on Nov. 16, the team defeated Mitty in a close match, 4-3. It was up to the No. 3 singles and the No. 1 doubles match to determine whether Saratoga would move on to the finals. The team only needed one more match in order to win and in the end, the No. 1 doubles team of Annie Lee and Sarah Lum pulled out a win during a 10-point tie breaker 7-5 in the third set.

“It was a really tough match, but we were able to accomplish it,” said junior Lauren Kuan. “Everyone is so ecstatic about finally defeating Mitty and going to the finals and NorCals.”