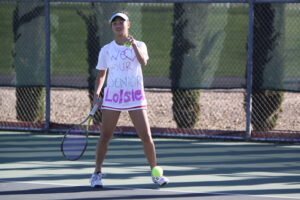 The girls’ tennis team beat Archbishop Mitty 5-2 in the CCS semifinal round on Nov. 15 at Courtside Club, securing themselves a slot into the final round of CCS playoffs and boosting their record to 21-0.

All three doubles teams won fairly easily in straight sets against the same teams they played in the Fresno Peachtree tournament at the beginning of the season in September. No. 4 singles player freshman Kalyani Narayan gave the team the necessary fourth match with a victory of 6-4, 6-2 over her opponent.

Additionally, No. 1 singles player junior Crystal Yen came down from 1-4 in the second set to win her match 6-2, 6-4. No. 3 senior co-captain Catherine Nguyen put a good fight before losing 7-5, 7-6 to Mitty’s former No. 1 singles player, who was moved down to play in the No. 3 spot for CCS.

The team’s longtime rival Monta Vista, seeded second in the tournament, beat Menlo in its semifinal round. The Matadors and Falcons will match up for the third time this season on Wednesday afternoon at Courtside for the CCS championship.

Both Saratoga and Monta Vista advance automatically to the CIF NorCal Championships on Friday and Saturday, Nov. 19 and 20 where they may meet again.