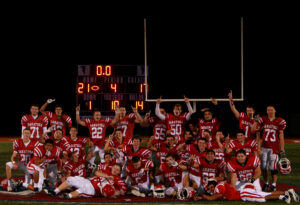 Within seconds of the game clock expiring, the green turf of the Benny Pierce field was replaced with a sea of red, as students and alumni flooded the field, screaming and chanting in celebration of the Falcons’ first regular season victory over Los Gatos since 1982. The Falcons managed to end the 27-year streak in a thrilling 21-17 victory over the Wildcats under the Friday night lights on Oct. 22.

Within seconds of the game clock expiring, the green turf of the Benny Pierce field was replaced with a sea of red, as students and alumni flooded the field, screaming and chanting in celebration of the Falcons’ first regular season victory over Los Gatos since 1982. The Falcons managed to end the 27-year streak in a thrilling 21-17 victory over the Wildcats under the Friday night lights on Oct. 22.

After taking over the head coaching job just three years ago, coach Tim Lugo managed to do what seemed to be the impossible. For him, the game meant more than just another victory for his team.

“I’m excited for the players because they no longer have to listen to everyone asking when it’s going to happen,” said Lugo. “Everyone doubts our guys every year, but this year they showed the school that they could do it. I’m speechless, but I knew they could win.”

The rivalry for this year’s match-up between the Falcons and the Wildcats intensified even before the teams even took to the field. On the wall of the Facebook event for the game, which was hosted by seniors Kevin Darchuk and Tim Lycurgus, fans from both schools posted harmless “smacktalk” at first, which is expected for a game with such history.

But the innocuous comments soon led to vicious and even racial insults resulting the punishment of several Los Gatos students. Although the rivalry between the schools has always been passionate, never have such actions been supported by the administrations of either school.

The Falcons and Wildcats stepped onto the field with high hopes for a victory from their fans. Both teams’ offenses struggled to score early in the game, but the Wildcats drew first blood with a 35-yard field goal by senior kicker Andy Heimer, who sent the ball sailing straight through the uprights. In their next offensive drive, the Cats steadily pounded the ball into Falcon territory using their power running game, and scored on a 4-yard dive up the middle by senior running back Garret Zeiter, followed by a Heimer extra point.

Despite being down by 10 early in the game, the Falcons refused to give up.

“We stayed motivated mainly because we knew that we could match up with [Los Gatos],” said senior linebacker and co-captain Greg Johnson. “The fans were huge. They helped us win big time.”

In order to jump start their offense, the Falcons took advantage of their unstoppable passing attack, moving the ball from deep in their own territory into scoring position. They capped their drive off with a 32-yard touchdown pass from senior quarterback Kevin Smith to senior receiver Chris Guengerich, tightening the Wildcat lead to 10-7 at end of the first half, after an extra point by senior kicker Peter Auvil.

After the opening kickoff of the second half, the Falcons started with the ball on their own 30-yard line and moved the chains consistently yet again. However, after two rushing attempts for no gain, the Falcons faced a third and long on the Cats’ 26-yard line. Using every bit of creativity he had, Lugo called for a triple reverse pass, a play the Falcons only practiced once before. The play, designed to fool the defense with its intricacy, worked to perfection. After faking a pass, Smith tossed the ball to Johnson, who tossed it to Guegerich, who tossed the ball back to Smith, who finally threw a 40-yard bomb to junior running back Troy Doles in the end zone, pushing the Falcons into the lead for the first time with a score of 14-10, after an Auvil extra point.

“It was the perfect call at the time,” said Hoffman. “We practiced it for the first time the day before and everyone was surprised when it worked. It was by far the [best] play we ran.”

The Cats quickly responded and managed to plow through the Falcon defense, driving run-by-run into the red zone. Late in the third quarter, the Cats regained their first half lead with a 1-yard touchdown run by Zeiter, and an extra point conversion, taking a 17-14 lead over the Falcons.

Down by three in the fourth quarter, Smith maintained his composure and led his red-hot offense down the field. Making no mistakes on the drive, Smith completed a 17-yard touchdown pass, his third of the night, to Guengerich with less than 4 minutes remaining.

With a 21-17 lead over Los Gatos, it looked as though Saratoga had finally secured a victory. But the Cats managed to squelch all Falcon hopes by moving into scoring position in the red zone with just 30 seconds left on the clock. In prime position to win the game for the Cats, Los Gatos senior quarterback Hayden Hibberd lofted a floater into the end zone, hoping the win the game.

Every single fan in the stands stood waiting in anticipation as Hibberd’s pass soared straight into the endzone right into the hands of Doles, who while playing cornerback, managed to intercept the ball in the air to secure a Falcon victory. With 26 seconds left on the clock, the Falcons took a knee to run out the clock. Counting down seconds while waiting for time to expire, the fans then stormed the field, capping off one of the most magical nights in Falcon football history.

Even though the madness seemed to only preside in Saratoga and Los Gatos, the Falcons got an unexpected shout-out from Seattle Seahawks’ head coach Pete Carroll on his twitter account (twitter.com/PETECARROLL) saying, “congrats to the saratoga falcons for beating los gatos 21-17 last night… 1st win over los gatos in 29 years!.” Carroll, whose son Brennan attending SHS, was sure to acknowledge what will definitely be remembered for years by Saratoga football fans.

For highlights of the game, visit : http://www.youtube.com/watch?v=Ty7jnnC-Mow