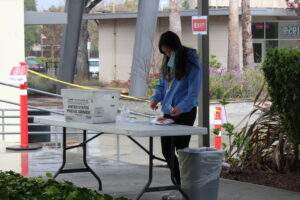 Recap: The team managed to qualify for CCS last year despite key players switching to different positions due to injuries.

After heavy delays and months of waiting, the district cleared indoor volleyball on March 15 — but the team still faces many obstacles.

Sophomore Noor Khan, a varsity libero who also plays for Mountain View Volleyball Club, said that playing club volleyball at the same time as school volleyball can be exhaustive and oftentimes stressful.

“I’m just running back and forth all the time and it's tiring,” she said. “But it’s what I like to do so I don't mind the hustle.”

The team also has a new head coach this season, Brendan Wang, who “definitely has a different coaching style,” according to setter and senior Hermione Bossolina.

While the team’s old coach used to spend more time on defense, Wang does not emphasize it as much. Instead, he has players do drills that focus on going through rotations so that they understand the placement and role of each position on the court.

Under Wang, the team went head to head with Lynbrook High School on March 29. Although they lost 3-1,Bossolina believes that the Falcons will be able to clinch a win during their second match against Lynbrook, since each team plays other teams in the league twice.

Because of the shortened season and COVID-19 restrictions, the volleyball team will have to forego traditions such as team bonding activities and the end-of-year dinner.

“It sucks that the season is shorter, but at the same time, I think we’re all just grateful that we get a season at all,” Khan said.