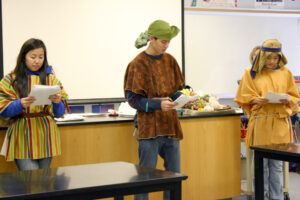 Faithwalk members act in a play about the Christmas story on Dec. 3.

“Therefore the Lord himself will give you a sign. Behold, the virgin shall conceive and bear a son, and shall call his name Immanuel,” proclaimed junior Brandon Pierce, clad in billowing printed robes in front of the room.

“Therefore the Lord himself will give you a sign. Behold, the virgin shall conceive and bear a son, and shall call his name Immanuel,” proclaimed junior Brandon Pierce, clad in billowing printed robes in front of the room.

It was a Friday lunch in science teacher Lisa Cochrum’s classroom, and the audience of 60-some students tried to eat their food (the evidence of which was apparent in the empty pizza boxes stacked nearly 3 feet high) without disturbing the performers. After all, a prophecy concerning the impending birth of a messiah had just been announced, and no one wanted to miss a second of the story of Jesus’ birth.

Faithwalk, one of the school’s most prominent Christian clubs, holds an annual Christmas play that depicts the Nativity story. The play was split into two parts, performed at the lunchtime meetings on Dec. 3 and Dec. 10.

“It’s a nice tradition that we keep annually,” said sophomore Priscilla Chu, one of the unofficial officers of Faithwalk. “We want to show people who are interested in coming to Faithwalk what Christmas means to us.”

This traditional holiday play began with a reenactment of the prophecy declaring the approaching birth of a messiah. It then followed the story of Mary and Joseph’s journey to Bethlehem, ending with Jesus’ actual birth. Mary was played by sophomore Megan Doles, Joseph by senior Tim Rollinson and the angel Gabriel by junior Deborah Burger.

“We take the scripts of the play out of a book, but we have to shorten them and narrow them down,” Chu said. “They’re pretty much the same every year, though. Not much about the plays has changed.”

Because of the length of the story, the Faithwalk’s officers decided to split up the play into two sections. This decision was made in order to accommodate all of the scenes they wanted in the skit and to provide more incentive for the audience to return for the next show.

“We end part one right before Mary and Joseph leave for Bethlehem,” said sophomore Stephanie Payne, another officer of the club. “In part two, there’s the actual birth of Jesus and some other holy shenanigans.”

Because of the time restraints, the performers were unable to delve into the Nativity story as much as they would have liked. Instead, they summarized the basics of the story to interest the audience without forcing too much information on them.

“[The play] is basically an introduction,” Payne said. “We try to make it interesting enough so that people would want to learn more about Christianity and maybe even go to church or something, but it’s definitely not an in-depth look into our religion.”

Although Faithwalk does not have official officers like many other clubs, they have leaders that organize events and herd student activities. Participation in the play is not mandatory for the leaders, but encouraged.

“We all love to do the play, so pretty much everyone is a part of it,” Chu said. “It’s just a really fun tradition that everyone likes to participate in.”