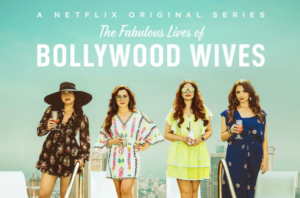 Photo by Courtesy of: IMDB.com

Airing on Netflix at the end of November, “Fabulous Lives of Bollywood Wives” covers the lives of four Bollywood socialites.

As I opened my laptop to watch the third episode of the Netflix show “Fabulous Lives of Bollywood Wives,” I was met with an interesting scene: Bollywood socialites Seema Khan and Bhavana Pandey started fighting as Khan was unhappy that Pandey did not stand up for her in a minor fight from weeks ago. While the fight was humorous to watch, I got increasingly bored and annoyed as it stretched over the entire episode and the next.

The first episode of “Fabulous Lives of Bollywood Wives” aired on Nov. 27 on Netflix and received poor reviews. IMDb rated it a 3.7 out of 10 and NDTV.com rated it a 2 out of 5.

I was excited to watch this show because I grew up watching Bollywood movies with my family, and I thought that it would be interesting to see these actors and actresses’ private lives. Moreover, I love watching reality shows like “Keeping up with the Kardashians,” so I expected to enjoy this show as well.

Unfortunately, I was disappointed.

The show focuses on the lives of four women who are wives of famous actors: Bhavana Pandey, Maheep Kapoor, Seema Khan and Neelam Kothari Soni.

Khan and Pandey are both fashion designers, and Soni and Kapoor are both jewellery designers. The quartet lives luxurious lives and all boast considerable net worths from their careers and fame.

My disappointment stemmed from two reasons, the first one being that the show didn’t actually show much of the stars’ personal lives or the big Bollywood events that they referenced so many times; instead, it was a lot of talk and no show.

I would have enjoyed seeing more of the ladies’ interesting jobs as well as their relationships with their children and husbands. However, the show instead spent far too much time discussing an inconsequential fight between Pandey and Khan over a minor incident that happened prior to the filming of the show. More infuriating, however, was that the show spent so much time on the cast talking about how they don’t have privilege while India has struggled during the pandemic.

The cast said many things that irked me. In a brunch with some family members, Kapoor applauds her daughter and niece for working so hard in their acting careers, saying that so many kids their age are still under their parents’ umbrellas.

In saying this, she fails to recognize the reason that so many kids are under their parents’ umbrellas because unlike her daughter and niece, these young adults don’t have a set career path that they were born with. Instead, they have to go to college and get a degree.

Taking advantage of given opportunities is one thing, but relentless self-flattery without acknowledging one’s privilege is another.

Another example of the cast’s blatantly flaunting their privilege appears at the end of the show when the four meet in a Zoom call to discuss how they’ve been handling the pandemic. In catching up with each other, they talk about how they would kill for a manicure-pedicure, how they had to cook every day, how their nails are so “naked” and how they’re “dying” in the heat because their AC was broken.

I understand being bored and upset during lockdown, but in a country with over 10.5 million COVID-19 cases and a little over 150,000 deaths, it couldn’t have hurt for the cast to not mention the slight inconveniences the pandemic has caused them.

My final verdict: Even though the show had some serious foundational problems, I still didn’t mind watching it. After growing up watching Bollywood movies, I liked seeing actor Shah Rukh and actress Gauri Khan’s cameos. And while the characters' conversations about privilege and nepotism were annoying, Kapoor and Khan were very funny and made the show entertaining.

I would give the show a 3 out of 5. If you’re looking for a mindless show with interesting cameos to put in the background while you do something else, “Fabulous Lives of Bollywood Wives,” despite its flaws, might be for you.