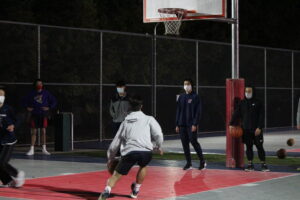 Photo by Photo by Selina Chen

Recap: The team’s season was cut short by a first round loss in CCS to Jefferson High School.

With a projected roster of mostly returning juniors and seniors after only losing two starters to graduation, the boys’ basketball team has a singular, focused goal heading into the season: winning out their league.

“We have the upper hand going into games this year because we’ve had the opportunity to develop chemistry and practice with each other more,” senior shooting guard Cameron King said. “Our strength is definitely our team’s shooting, but we still need to work on consistency and taking care of the ball.”

While the pandemic initially stifled the boys’ rhythm going into the offseason last year, the team has been working hard to prepare for the upcoming season. In addition to individual skill work throughout the past year, the boys completed conditioning training in pods on the football field over the summer.

The team was cleared to practice together on the sports courts in January. While they currently still practice outdoors, the team is hoping to have their first indoor practice on April 5 and host their first league game against Wilcox on April 21.

“Having a senior season means a lot to me,” senior point guard Tyler Chu said. “I’ve been on varsity since freshman year, and my whole high school career I’ve been told that this is the year for us to win it all.”