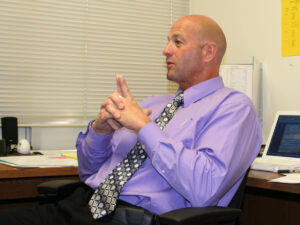 After attending grade school in New York City, Cerbone continued his studies at the University of Wyoming on a football scholarship. His college years behind him, he headed back to the city to start his career as a law enforcement officer—more specifically, an undercover narcotics officer.

“I’ve seen some pretty horrific things in that job. I can’t even tell those stories to students,” he said, somewhat seriously. “That job shaped me, and it shaped how I see the world.”

After fulfilling his duty as a narcotics cop and having loved his time working as a coach, Cerbone moved into teaching and administration. His first job was teaching physical education in the Bronx in New York. After working there, he became an assistant principal, frequently moving around. During his five years as an administrator, he got the opportunity to learn about himself and grow as a person.

“I think I bring a diversity of experiences in many degrees, coming from the real world,” he said. “I do think I am good at giving advice. I’ve been to the real world and back, and from that I’ve taken on a more realistic point-of-view on subjects than before.”

He has also learned to be straight in his dealings with students and parents.

“I think that one word that could be used to describe me after these years in school administration and my whole life in general would be integrity,” he said. “Sometimes, people don’t even want to hear what I have to say.”

Along with a unusual background, Cerbone is a unique individual in the world of school administrators in a few ways. One of them is that he owns two wolves as pets.

The two wolves are rescued animals. The male wolf’s name is Tatanka, which, in the language of Lakota Sioux, means “Buffalo.” He picked up Sioux phrases such as this during his time on a South Dakotan Indian reserve. The female wolf is “Lupa,” which is Italian for “female wolf.”His pets are just one important joy in his life. He has joys that make his role feel worthwhile to him.

“My favorite part about this job at other schools, in general, was seeing struggling kids graduate,” Cerbone said. “I felt like I played a role in the child’s success; it’s always a proud moment.”

To achieve this reward, he must love and be committed to his job. One good example of this love for his job is that he must drive over 90 miles every morning to get to school from his home in Petaluma. He hopes to move closer one of these days.

“The reason I took this job was because I thought it was a beautiful school,” he said, smiling. “There are great students, great teachers, and it’s a very welcoming place.”