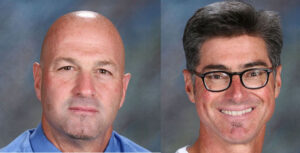 This semester, Mount has been both the principal of NOVA and taught two English 12 classes at Saratoga High. He previously taught AP English Language and Composition here before taking a position at the district office in 2006-2007.

“[Mr. Mount] taught here for years and is familiar with Saratoga High students,” Anderson said. “He has a great teaching background, and will be great for the school.”

Mount’s appointment and Cerbone’s transfer were decided at the Jan. 11 school board meeting, which voted 5-0 in favor of the change.

Cerbone’s conspicuous absence from campus since the end of winter break has been a cause of confusion for students, parents and faculty alike.

The reason behind the change is a question that has yet to be answered by the administration, who declined comment citing confidentiality concerns.

School board meeting agendas indicate that board members discussed the “discipline/dismissal/release” of a Saratoga High employee before winter break but could only address the issue after school had resumed.

In addition, the Saratoga police blotter in the Saratoga News reported an altercation that occurred on Dec. 13 at 8 a.m. between two Saratoga High employees, in which one party apparently wanted “to prosecute the other.” The Sheriff’s department also declined comment because the case, which had been marked as “battery,” had not been adjudicated yet.

Meanwhile, assistant principals Karen Hyde and Brian Safine, as well as principal Jeff Anderson, have assumed Cerbone’s duties until Mount formally replaces him. The assistant principal position that Mount will hold is in charge of student discipline, facilities and athletics, among other duties.

Cerbone gained attention when he first arrived at Saratoga High this fall through his unique background, which included a stint as an undercover narcotics officer for the NYPD and his experience as the owner of two wolves.