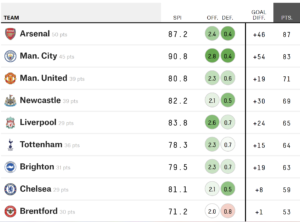 Photo by Fivethirtyeight
Famous sports analytics company Fivethirtyeight’s supercomputer predicts that Arsenal will win the Premier League, with the top 4 staying as it currently is.

Permalink
Soccer’s most popular domestic league is just about halfway through, and with that arises a need for a recap of the season so far.

Just a week after the ending of a mesmerizing World Cup, where Lionel Messi and Argentina triumphed against superstar Kylian Mbappe’s France in a nerve-wracking back-and-forth affair, soccer’s biggest stars swapped their nation’s colors for their club stripes.

The English Premier League, which returned to action on Dec. 26, is regarded as the best domestic club soccer league in the world. Fielding elite players such as Belgian Manchester City midfielder Kevin de Bruyne and Manchester United’s star striker Marcus Rashford, talent is abundant in the Premier League.

The division’s financial might also confirms it as the world’s best soccer competition: Its yearly revenues are 3.5 billion Euros above the next league, the German Bundesliga.

With the 2022-23 season just crossing its halfway mark — 20 out of the 38 matchweeks have come to an end — I’ve decided to analyze how the campaign has gone so far.

The chaos of a mid-season World Cup has created a more unpredictable and unusual season than those of previous years.

Serial contenders Chelsea currently sit smack in the middle of the league table at 10th place, with 20 teams in total.

The Blues have spent a record-breaking $550 million on new players over the past year, yet with only one fewer loss than wins, they need to integrate their signings fast if they want a chance at salvaging what’s been a disaster of a season for a club of their stature.

Formerly sleeping giants Manchester United and Arsenal are having a renaissance of sorts — the former is sitting comfortably in third place after a dismal start to the season which saw United lose two matches in a row.

The signing of world class defensive midfielder Casemiro has made the Red Devils an impenetrable unit — they have kept the second-most clean sheets (games with zero goals conceded) in the league. Additionally, creative midfield maestros Bruno Fernandes and Christian Eriksen have performed superbly, with the former’s 49 total chances created ranking him third across the whole league this season. With a pivotal win against rivals Manchester City on Jan. 14, United are definitely a force to be reckoned with.

London club Arsenal are having a sensational season. Sitting top of the table with an 8-point margin to second-place Manchester City, the Gunners have been nothing short of unstoppable on both ends of the ball, scoring the second most and conceding the second fewest goals in the Premier League. Youth has been the driving force behind Arsenal’s success this season — their 40-year-old manager Mikel Arteta is the youngest manager in the league, and superstar wide forwards Bukayo Saka and Gabriel Martinelli are both 21. Saka and Martinelli have scored six and seven goals respectively; they’ve stepped up to the plate right when Arsenal needed them to. Arsenal are on pace for their first Premier League win in two decades should they keep their current form up.

Chelsea, Manchester United and Arsenal are three of the Premier League’s “Big Six.” The other half of the sextuplet have been mostly underwhelming, compared to what their history and stature in the sport suggest.

Tottenham Hotspur and Liverpool both sit outside the elusive top 4 spots at No. 5 and No. 9 respectively. Spurs started the season well, and their talisman Harry Kane’s 15 goals puts him at second in the league. However, their form has been out of boil of late, and with key holes in the squad at right-back and in midfield, Spurs falling lower in the table would not be a shock.

Liverpool’s demise this year was unprecedented. Having just won the FA Cup and Carabao Cup a season prior, as well as making a Champions League final and finishing second in the Premier League, the Reds had a stellar 2021-22 campaign. However, with key injuries to forwards Luis Diaz and Diogo Jota and the departure of club legend Sadio Mane, the Merseyside club has struggled. New strikers Darwin Nunez and Cody Gakpo definitely possess high ceilings, but expectations to replicate the goal outputs of Diaz, Jota and Mane are misplaced. Additionally, with noticeable holes in midfield and seemingly no money to fund signings in an open January transfer window, 2023 is looking to be a slog for Liverpool.

Rounding out the behemoths that make up the Big Six are Manchester City. Though they do currently sit second in the league, they don’t look like the steamrolling unit that has won four out of the last five Premier Leagues with a fair share of FA and Carabao Cups to boot. Newly signed phenom striker Erling Haaland has provided goals — a stunning 21 in 18 games to be exact — but key contributors of the past have gone missing. The Portuguese trio of midfielder Bernardo Silva and defenders Joao Cancelo and Ruben Dias have performed miserably for a majority of the season. Now eight points behind leaders Arsenal, becoming back-to-back Premier League winners is a dwindling possibility for the Cityzens.

There are 14 teams that exist outside of the Big Six, and it’s only right that they receive discussion too. Newly promoted from the second division, London club Fulham have performed admirably. Backed to finish in the bottom three places and thus get relegated back to the Championship, they currently sit in sixth. Midfielders Andreas Pereira and Joao Palhinha have been pivotal in their execution of a high-octane style of play, while Serbian striker Aleksandar Mitrovic has provided key goals.

Newcastle United, recently taken over by a wealthy Saudi consortium, have experienced a meteoric rise this season. With only one loss after 29 matches played, the Magpies are third in the league, a testament both to their impressive squad building as well as manager Eddie Howe’s brilliant coaching. Recently signed defenders Sven Botman and Kieran Trippier have provided solidity at the back, while industrious central midfielder Bruno Guimaraes has been their creative lynchpin in the middle of the park.

Brighton and Hove Albion, currently 7th, have been consistent over the course of the year. Despite letting star manager Graham Potter leave to Chelsea in September, their results haven’t dropped off. Potter’s replacement, Italian Roberto de Zerbi, took to the post in no time, with his possession-oriented approach allowing Brighton to carve teams open with ease. Recent World Cup winner Argentine midfielder Alexis Mac Allister has been a lynchpin for the Seagulls’ dominance — his creativity, combined with midfield partner Moises Caicedo’s defensive prowess, has been the foundation for sustained production.

Additionally, clubs such as Brentford (7-9-4) and Nottingham Forest (5-6-9) are punching above their weights, while usually strong sides like West Ham United (5-3-12) and Wolverhampton Wanderers (4-5-11) are underwhelming, despite strong squads and heavy spending.

With half of the season still remaining, the remaining 19 matches of the 2022-23 Premier League should fill viewers with unbridled excitement at what’s to come.