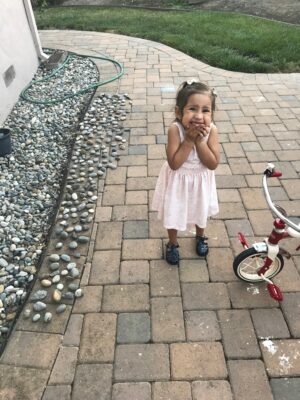 Economics and world geography teacher Todd Dwyer watched proudly as his 3-year-old granddaughter, Aaliyah, named every one of her 37 dinosaur toys.

During second semester last year, Dwyer took a leave of absence after he and his wife gained permanent custody of Aaliyah.

Dwyer said that his granddaughter is doing well at World of Discovery preschool at Argonaut Elementary School, where Aaliyah has been consistently ahead of childhood development milestones.

After teaching for 23 years, Dwyer feels that it is not difficult to balance his job with parenting, and doesn’t find that parenting affects his teaching.

In order to take care of her granddaughter, Dwyer’s wife quit her job to become a full-time caregiver to Aaliyah.

“Financially, it has been challenging, going from two-income earners down to a single-income,” Dwyer said. “But there are times in life when you simply have to do what you have to do.”

While Dwyer has had to make changes to take care of his granddaughter, he feels that he hasn’t lost out on anything.

“In fact, my wife and I spend more time together as a result of having Aaliyah,” Dwyer said. “We go for bike rides or to the park or to the library or Barnes & Noble or out for Thai food or sushi or pho.”

While Aaliyah is only in preschool, Dwyer plans to keep her in Saratoga schools and eventually send her to Saratoga High.

Dwyer hopes that his granddaughter can grow up without having to stress over academic performance.

“I wish that high school was not so competitive, and not just Saratoga, but high school anywhere,” he said. “For me, the axis of evil is Big Tobacco, the NRA and the College Board. I don’t want her to suffer any type of anxiety or stress from education.”

Dwyer says that he feels “blessed” that his granddaughter is curious and intelligent, referencing her ability to recognize and name all 37 of her dinosaurs.

“She enjoys learning and we want to keep her engaged so that she will continue to enjoy learning and school generally, as opposed to seeing her classes as something she ‘has to do,’ like an academic obstacle course,” Dwyer said.