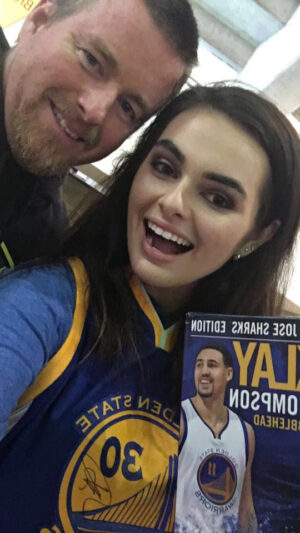 Julia Miller and her father pose for a pic at the recent Golden State Warriors game.

This summer, the NBA was stunned when former league MVP Kevin Durant chose to leave the Oklahoma City Thunder after nine years to play for our Bay Area team, the Golden State Warriors.

After I watched the Warriors lose Game 7 of the NBA finals last season to Cleveland, not only was I devastated, but I had lost all hope of Durant ever moving to California to play for us. That’s why I, along with almost every NBA fan in the world, was amazed when I read his farewell to his teammates and fans in Oklahoma City, and his greetings to the West Coast.

Durant, a seven-time NBA All-star, slowly rose to stardom after he was drafted in 2007. Few would’ve ever guessed that a player as popular as he is would leave his loyal Thunder fans to play for our team in the Bay.

Soon after Durant’s first practice with the Warriors, the price of his jersey skyrocketed to $110. I couldn’t believe how quickly fans jumped on the Durant wagon without ever having seen him play on our court.

Even though Durant’s addition is powerful, I was still skeptical leading up to the preseason game I attended on Oct. 6. I was afraid, as a die-hard Warrior fan, that the old team that I had come to love and root for unconditionally would be completely altered after all the player trades during the offseason this summer, the most significant trade being the exit of Warriors star center Andrew Bogut.

Immediately following the tip-off, Durant dominated the Warrior offense, scoring 25 points by the end of the game. His tall, lean figure mixed with his outrageous ball-handling skills prevented every defender from successfully guarding him.

Although Durant ultimately won us the preseason match against the Sacramento Kings, I missed the spotlight on Curry throughout the game. Durant’s dominance seemed to overshadow the star point guard, and people were noticeably cheering harder for Durant than Curry.

The star of the team could shift from Warriors veteran Curry to the newbie, Durant. Although Durant may guarantee the Warriors a ticket to the championship round this year, I hope fans don’t push Curry, the leader who brought the Warriors out of its 50-year championship drought, to the side for the  new, shinier player Durant just because of the hype surrounding him.