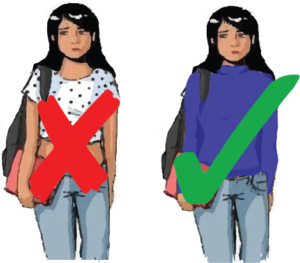 Photo by Michelle Wan
What is considered to be socially acceptable throughout the years?

Permalink
Are dress codes merely a suggestion, or are there boundaries that students should still abide by?

In the past few years, the concept of a dress code has raised much controversy regarding double standards between genders. At Saratoga High, there is a very flexible dress code enforcing how students express themselves through clothing that is not intensively enforced.

Some basics include: Covered undergarments, attire depicting drugs, violence, and demeaning comments, and appropriately lengthened shorts/skirts. In practice, this means the limits are nearly endless for students, as long as they use common sense while showing off their style. But how far is considered too far?

At Redwood Middle School, students (predominantly girls) were reprimanded for wearing tank tops less than two finger straps thick, shorts that didn’t surpass fingertip length, and pants that exposed too much of their ankles (very provocative). The majority of my wardrobe consisted of spaghetti-strapped tanks, shirts that cut off above the stomach and shorts that are the embodiment of its name — most of which fell short of dress code standards.

Personally, going into high school allowed me to dress to suit my personality, bringing me more confidence. Not having to worry as much about whether my top is too unconventional or my shorts are too short allows me to almost look forward to school sometimes. Clearly, there are some personal boundaries I refrain from crossing: no derogatory prints such as swear words or nude figures, animal suits and outrageously outdated trends like ripped skinny jeans.

In the past, I’ve worn some questionable clothing choices that most likely wouldn’t be looked well upon in earlier times. I probably would’ve been considered an evil entity in the Salem Witch Trials and burned at the stake, along with my entire wardrobe of see-through clothes. But walking through the halls of our school, I’ve noticed nobody really bats an eye at a tank top and shorts, unless I’m wearing an atrocity of rainbow Crocs and that one Toy Story themed Link Crew T-shirt.

Nowadays, teenagers seem to be drawn in by paying more for less fabric. Most teachers, on the other hand, say they don’t care about what you choose to wear, but I have noticed the trend: the smaller the clothes, the longer their stares last.

There have definitely been days where I felt riskier and risqué-r, dressing in clothes that weren’t considered objectively school appropriate. For example, on a casual Thursday morning, I put on a beige top that wrapped around my neck and cut off significantly higher than my belly button. Along with it, I wore low-rise cargo pants that held on a few inches below my belly button and right at the hips, leaving my entire stomach bare and cold.

This was an exceptionally controversial outfit and I knew I was on thin ice, but I went ahead with it anyway. I definitely received significantly more stares and quick looks, which quickly prompted me to cover up as I was prepared to do anyway. However, most clothing pairs well with common sense, so I simply throw on a jacket or sweater whenever appropriate.

Whether or not I receive extra judgment with the clothes I choose to wear, there’s no other way I would choose to express myself. Thankfully, there is not a strictly enforced dress code to restrict me from enjoying a good school day with clothes I love to wear.