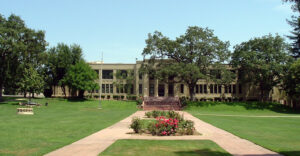 Because of Los Gatos High School’s growing enrollment, Saratoga students will no longer be able to transfer to Los Gatos High starting next school year.

Because of Los Gatos High School’s growing enrollment, Saratoga students will no longer be able to transfer to Los Gatos High starting next school year.

Los Gatos, with about 1,800 students, is significantly more crowded than Saratoga with its 1,350 students.

“There are houses and businesses all around [Los Gatos High], so they have a finite space, and they’re full,” principal Jeff Anderson said. “The district is saying, ‘We’re not going to exasperate that problem by sending more kids over there.’”

About 10 to 15 Saratoga residents apply for the Los Gatos High transfer each year, Anderson said.

Students living in Los Gatos will still be able to go to Saratoga High.

Jane Marashian, the assistant to LGSUHSD superintendent Cary Matsuoka, maintains that the policy is not being drastically changed. The policy normally allows transfers between Saratoga and Los Gatos.

“[It] says that every year, we have to look at the number of transcripts we can or cannot consider for open enrollment,” Marashian said. “We’re really just exercising the current policy.”

Many students enjoyed the versatility of open enrollment. Sophomore Shreyas Nagaraj, a Los Gatos resident, transferred to Saratoga High at the start of his freshman year.

“I transferred because I wanted more of an academic challenge,” Nagaraj said.

Nagaraj agrees with the decision to close Los Gatos’s open enrollment. He realizes that overpopulation is inevitable with unregulated transfers into the high school.

Despite these changes, Anderson said exceptions to the policy are possible.

“If there’s a student who is having a serious problem with another student, or if they’re being bullied and they can’t be around those folks, then that might precipitate a change,” Anderson said. “It has to be a compelling reason, and ‘I just don’t like it here anymore’ isn’t very compelling if that’s all you can come up with for a transfer.”

“[Eighth graders] will go to Saratoga or they’ll choose to go to a private school,” Anderson said. “Usually the number of students who want to transfer to Los Gatos High once they get here is really small.”

Four board members unanimously decided the change in Los Gatos’s open transfer at a board meeting last June. After reviewing Los Gatos’s increasing middle and elementary school class sizes and restricted maximum capacity, the board made the change.

“It was a necessary result from a demographic study that indicated that Los Gatos High was going to pass capacity,” Marashian explained.

Open enrollment for the 2011-12 school year is open from Feb. 2 through March 7 to Los Gatos residents who wish to transfer to Saratoga High.