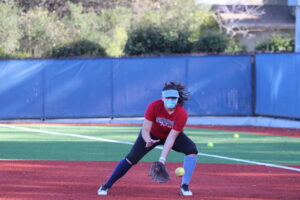 Recap: Last year’s season was canceled due to COVID-19

Following the cancelation of last year’s season, the softball team is looking to rebuild and further emphasize skill work.

Currently, the team holds one and a half hour optional practices on the softball field on Wednesdays and Saturdays. Practices have mainly been focused on fielding, batting drills and teamwork.

“Practices are going well but the turnout is light,” head coach Mike Davey said. “We’re mostly doing skill work in preparation for the season since the girls have experienced an extended layoff.”

After losing nine seniors to graduation, the team will not have enough players to form a JV team and will likely have all 12 players form a singular varsity team.

“We lost nine seniors last year, and our leadoff and starting center fielder also transferred at the beginning of the semester,” Davey said. “You can imagine that will hurt us quite a bit.”

Due to low participation, players that have little to no experience playing softball will be starting on the varsity team.

“We have a wide variety of skill levels, but the strongest players have been very patient with the newer girls, and the less skilled girls are improving quickly,” Davey said.

According to senior shortstop and pitcher Bela Chauhan, the team has also had to adjust to playing while wearing masks and social distancing.

Despite these changes, Chauhan is still optimistic about the season and the team dynamic.

“This season, we are hoping to have fun and grow as a team,” Chauhan said. “I’m really excited to see our progress at the end of the season.”