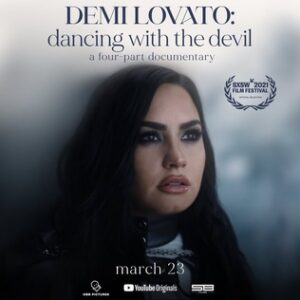 That phone call saved Lovato’s life, as she was only five to ten minutes away from death after overdosing on heroin and fentanyl; at the age of 25, Lovato suffered three strokes and a heart attack, leaving her with permanent brain damage and impaired vision.

From her experience as a child star on Disney Channel to her overdose, Lovato powerfully portrayed her entire journey in the new YouTube Original four-part documentary, “Demi Lovato: Dancing with the Devil.”

Each episode is around 20 minutes, titled “losing control,” “5 minutes from death” and “reclaiming power” and “rebirthing.” Lovato and her closest family and friends discuss what happened on the night of her overdose and the events that led up to it.

However, Lovato’s story is about much more than simply overcoming her own challenges; it also serves as a guide for students and parents to discuss relationships, different forms of drug rehabilitation and mental health treatments.

The crucial role of parental influence and effective communication in children's growth is demonstrated in Lovato’s documentary. Her familial struggles began at a young age with her dad, Patrick Lovato; he was an estranged father because of his substance abuse and violence toward Lovato’s mother. In 2013, he died of cancer, but his time of death is unknown, as his body was undiscovered for over a week.

“Every summer now that rolls around, I spend it thinking, ‘Was today the day that my dad died? Was it tomorrow?’” Lovato said in Episode 1. “And then also knowing by the time Father’s Day rolls around he was lying there rotting. That was the fear I always had for him, that he would end up alone. And he did. He died alone.”

Lovato also discussed her participation in beauty pageants at a young age. They contributed to her low self-esteem as she tried to pursue the “perfect body.”

“I remember actually making a pact with myself saying, ‘If I don’t win this pageant, I will never eat again,’” she said.

The pageants also worsened her bulimia, an eating disorder characterized by cycles of binging and purging. Her  mother struggled with the same body image issues. At one point, Lovato stopped eating entirely and purged so often that she began to throw up blood. Her team had to be extremely careful with the food around her to avoid relapses. Lovato described her battle with bulimia to highlight the necessity of starting conversations on getting help through both psychotherapy and nutritional education.

Along with bulimia, Lovato was the victim of two sexual assaults: one when she was 15 and the other in adulthood.

Lovato didn’t initially want to publicly speak out about both assaults after she saw women like Rihanna, whose photos of face bruises in the Chris Brown incident were leaked to the press; however, she ultimately decided to share her #MeToo stories in her documentary. Her act has inspired and empowered others to use their voices and their platforms as well to talk about their traumas and spread awareness.

For example, actor Will Ferrell felt moved after watching Lovato’s emotional Grammy’s performance of her song “Anyone.” After watching the emotional performance, he emailed her to let her know that he felt very connected.

“I don’t write emails like this usually […] I want[ed] to let her know, hey you are now affecting me in a way that you should feel really proud of,” Ferrell said.

Like most people, I was shocked to see the severity of Lovato’s overdose and the hardships she has experienced. Most importantly, I realized that behind the celebrities’ portrayed perfection, they are vulnerable and, some like Lovato, are denied the freedom to speak up.

I am hopeful that Lovato’s story will lead to change as it empowers more people to share their own stories  about #MeToo, drug abuse, domestic violence, eating disorders and mental health. Eventually, it will raise discussions and social awareness on compassionate drug treatment, kind self-talk (someone’s inner voice) and how to cope with sexual trauma and violence. These conversations will allow our community to become a more inclusive place where we feel encouraged to show emotional vulnerability and seek the guidance we need.