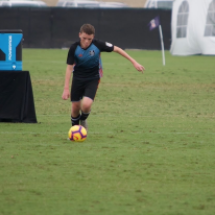 When junior Lauren Yarrington wants to play soccer competitively beyond high school, she never imagined how the COVID-19 pandemic would throw hurdle after hurdle in her way.

For instance, Yarrington has had to resort to sending emails and highlight videos directly to coaches since scouts cannot come to games that aren’t being played right now. Despite this, she remains hopeful that the team will be able to resume games in the months ahead and her visibility can increase.

Yarrington started playing soccer when she was 5 and began playing competitively when she was 7 for De Anza Force. While she always considered playing for a college, it was never a sincere effort until just a few years ago.

“It wasn’t until recently when I really felt that I wanted to pursue college soccer seriously,” Yarrington said. “I really enjoyed playing high school soccer, and I wanted that same experience in college.”

Two other juniors, Parsa Hashemi and Etienne Casanova, share Yarrington’s frustrations about not being able to go through a normal recruiting process.

Hashemi, who is looking to get recruited for football, started playing on the school’s JV football team during his freshman year and reached varsity as a sophomore. Although he plays as wide receiver and safety, he decided to focus on kicking to have a better chance at playing college football, perhaps even highly competitive Division 1.

Currently, he has attended a few camps where he has met coaches from schools like Cal Poly, Chapman and other smaller schools.

Casanova said that without games, he’s been unable to represent his improvement as a player to coaches.

“It sucks because I’ve made big strides to my level recently, and I have no film of me playing in games to show that improvement,” Casanova said.

Casanova, who began playing when he was 3, has played on the nation’s highest level of youth soccer — the U.S. Soccer Development Academy — and was selected twice to represent that league in Spain. He currently plays for De Anza Force U17 Academy. After deciding that he wanted to play soccer at the next level, he has been eyeing Ivy League and other academic-focused schools.

“I am not too concerned about the level of soccer at any school although it’s definitely a bonus,” Casanova said.

Although the athletes understand the need to stay distanced and safe during the COVID-19 pandemic, the loss of their seasons and the new difficulty of the recruiting process has proved frustrating.

“Junior season is definitely the most important to put your name out there and the fact that our season is in jeopardy is really disappointing,” Hashemi said.