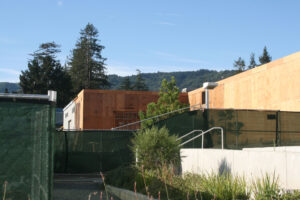 “If someone is a singer and wants to record a demo tape, they can come right in and use the audio studio,” said Media Arts teacher Tony Palma. “Or Mr. (Chris) Mahle can bring the drama students in to shoot a scene in the TV studio.”

This addition to the school will provide the students with quality equipment and space that is built to resemble a professional studio.

Many students such as sophomore Megan Yen can’t wait to see this building become a reality.
“Having a TV room and special audio recording room is really cool,” said Yen. “A lot of other schools don’t have that kind of resource.”

Although today’s economy is still causing issues with state and school budgets, “nothing will be cut from the structural safety of the building” according to Palma. The estimated cost of the project is around $2.2 million. Palma has received a grant from the state to fund a large part of the building, and the district has also set money aside for the project.

“Although we are a little over budget, the district has absorbed the cost and has set aside… extra money to pay for anything that will go wrong,” said assistant principal Joe Bosco.

Although the planning of the building has been finalized and the funds have been put aside, the building has been modified to reduce the cost and at the same time create the most collaborative environment possible. Palma, along with the rest of the MAP staff, met with representatives from Adobe and eBay last year to plan the layout. Current classroom blueprints stray away from the usual computers-around-the-perimeter arrangement. In contrast, the future desks, which will be placed in pods, are “funky shaped” and in “Google colors.” The main focus is creating a unified team atmosphere, according to Palma.

“We want to make it easier for students to learn how to work together,” said Palma, “Then they’ll be more prepared for the real working world.”

These students will be able to fully appreciate the equipment with the guidance of the MAP teachers. Although the new building is sure to bring excitement and enthusiasm throughout the program, the positive atmosphere provided by this staff will be what makes the new building most distinguishable on campus.

A lot of time and effort has been put into this building and the results are sure to be spectacular, assistant principal Joe Bosco said. From the original drawings to the construction site, Palma has assumed a major leadership position.

“Palma has been a pivotal point in this project,” said Bosco. “It’s his baby, and he’s doing a great job with it.”