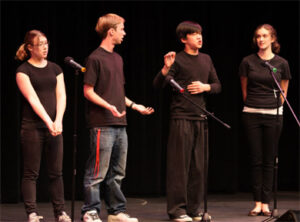 Students perform in Concert for a Cure.

Renalds said her goal was to raise $10,000 for the diagnosed teens. With the tickets being just $5 for students and $7 for adults, Renalds said $10,000 was extremely ambitious.

Renalds said there may have been as many as 250-275 attendees, and the benefit concert made roughly $3,000. Renalds was pleased with the results, since more donations are still coming in for the cause.

“I was extremely impressed with performers and the amount of people that turned up. It was stressful, but I had really good feedback of what everyone thought about the concert. In general, I’m very happy with how the concert turned out,” said Renalds.

The purpose of the concert was to help teens that are diagnosed with epilepsy, a brain disorder that causes spontaneous seizures among tens of thousands of teens each year.

“This topic is really close to my heart because I was actually diagnosed with epilepsy before. There’s nothing you can really do to cure it but there’s some medicines and treatments to help prevent more seizures from happening,” said Renalds.

“The concert was so fun! Even though I had a bunch of tests to study for this week, it was worth going. Everyone performed really well,” said sophomore Christopher Vu.