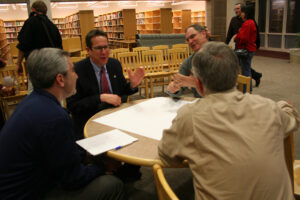 Principal Jeff Anderson and teacher Kirk Davis discuss budget at the townhall meeting in the Saratoga High Library on Feb. 25.

“Given the savings from the teachers, cuts from administrators, and the plentiful reserves, we find that the deficit can be cut with minimal losses to our classrooms,” said District Teachers Association President Kevin Rogers and SHS teachers Matt Torrens and Kerry Mohnike in a letter to the school board. “Failure to [stray away from classrooms] risks dismantling the very excellence that enriches the communities of Los Gatos, Monte Sereno and Saratoga.”

Teachers were given the chance to voice their opinions and concerns at a board meeting that took place at the Los Gatos High School Library on Feb. 9. Around 60-70 teachers from both Los Gatos and Saratoga High Schools attended the meeting to hear the school board and their fellow peers speak out on behalf of their school and department.

English teacher Jason Friend was the first teacher who spoke in front of the school board. Friend, who is the department head for English, argued against increasing class sizes, specifically English, in fear of some students “slipping through the cracks.” Teachers, as well as students, agree with Friend; they feel that an increase in class sizes will significantly limit students’ education and one-on-one conversations between students and teachers.

“I think an increase in class sizes will decrease the amount of attention we get from teachers,” said junior Daryl Chang. “At Saratoga, so far it’s been really good in that teachers can give you individualized attention.”

The school board will be making many cuts in technological improvements, school improvement, the guidance counselor program, adult education, summer courses and NOVA, the district’s alternative school. However, even after reductions, the district will still have to face a $1.33 million deficit for 2010-11. In order to “fill the hole,” the district was at first looking to decrease by current 32 sections at the two high schools and let go some staff members; teachers at the bottom of the seniority list will be the first to lose their jobs.

In order to try to save about eight sections, the school board has tentatively decided to take out $200,000 from a $4 million strategic reserve and replace the money in the future. This possible solution was used several years ago.