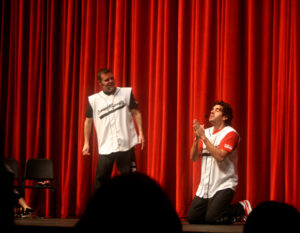 The six-man comedy troupe “ComedySportz” brought its entertainment to a packed McAfee center on Dec. 13 to raise funds for the Media Arts Program (MAP).

The six-man comedy troupe “ComedySportz” brought its entertainment to a packed McAfee center on Dec. 13 to raise funds for the Media Arts Program (MAP).

At $10 a ticket, the act brought in nearly 10 times the investment of ComedySportz for MAP, since the group performed to a near full house of 500 students, parents and teachers.

“ComedySportz is such a fun event that the high turnout didn’t surprise us,” said MAP Coordinator and English teacher Kerry Mohnike.

ComedySportz is an improvisational comedy group that creates different situations in two separate teams. The two teams battled for the most points in games that tested the players’ improvisational wit. The games included reciting stories, acting out situations, making speeches and playing charades. The show also included a good amount of audience participation.

The enjoyable performance was based on the tag-line, “Finals are coming; Laugh while you can.” The attendees enjoyed the show as source of relaxation and stress alleviation before the heavy studying for the semester finals.

“It was a lot fun to watch with my friends,” sophomore Feargus MacFhionnlaoich said.

Mohnike felt the event was a success, as it proved to be a night of clean jokes and laughter.

“If you were there at the performance, you would understand that it was a night of ‘coagulating, bodacious prestidigitation,’” Mohnike joked, in reference to a joke made during the show.

ComedySportz performs on Fridays at 7 p.m. and 9 p.m., and on Saturdays at 9 p.m. and 11 p.m. in downtown San Jose near the intersection of San Carlos and 2nd Street. MAP hopes to make ComedySportz an annual event before finals.