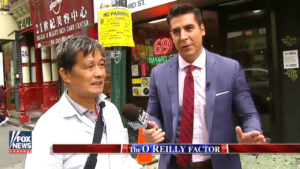 Photo by Courtesy of http://www.someecards.com/entertainment/tv/watters-world-chinatown-racist-fox-news/

“Donald Trump beating up on China at the debate,” the reporter asked an elderly Asian man. “How does that make you feel?”

The man laughed and smiled at the camera, obviously not understanding the question as cricket sounds played in the background.

“Is it the year of the dragon?”

The camera zoomed in on the silent, still-smiling Asian man.

After five more seconds of silence, the Asian man took a drag from his cigarette and Fox News reporter Jesse Watters finally stopped badgering him.

In this segment, however, “Watters’ World” took its usual dose of satire a step too far.

On Oct. 3, Fox News had the opportunity to cover the increasingly important Asian American vote in this presidential election. Instead, they botched it: Watters went to Manhattan’s Chinatown to harass unsuspecting Chinese immigrants, many of whom do not speak English, with condescending questions and racial stereotypes.

Beginning with an “oriental” piano riff, Watter’s segment immediately spiralled into various other mockeries of Chinese tradition and language.

Watters asked the immigrants questions like “Do you do karate?” and “Do Chinese people dance?” in order to get cheap laughs. While stereotypical jokes here and there are not necessarily a problem, Watters spent more time appropriating and even degrading Chinese culture than actually asking questions pertaining to the election.

Even when he did ask questions about the election, half of the interviewees he selected were elderly Chinese people who were not fluent in English. Watters then proceeded to ridicule their confusion through cuts to a movie scene where a woman yells “Speak! Why won’t you speak!”

Additionally, his interviews drew a divide between Chinese Americans and white Americans. Watters continually asked interviewees whether China is “America’s friend,” at one point even asking a woman, “So, can you guys deal with North Korea for us?”

Watters views this community in Manhattan’s Chinatown as foreign even though Chinese Americans have been integrated into and influenced American culture since the 1800s.

Asian Americans are not Chinese politicians. Nor are they only useful to cater to or serve white Americans’ needs. By asking for “you guys” to deal with North Korea “for us,” Watters treated Chinese Americans as if they were not considered part of the “us” Americans and were only useful for dealing with “Asian problems.”

Chinese immigrants are American citizens. By treating them as if they were non-American foreigners, Watters furthers racial discrimination against the Chinese American population in a time when a presidential candidate has blamed the Chinese for “inventing global warming as a hoax” and stealing millions of American jobs.

While “Watters’ World” was blatantly racist, a great deal of the blame must also be placed on the Fox News’s right-wing news and talk show “The O’Reilly Factor,” which chose to use the “Watter’s World” segment to discuss Asian American political views.

By using a comedy bit to cover the Asian American vote, O’Reilly discounts the importance of the Asian population, which makes up 5.6 percent of the total U.S. population but is the nation’s fastest growing minority group.

As ex-presidential candidate and Florida governor Jeb Bush stated in 2013, Asian Americans are “the canary of the coal mine” and if the Republican Party loses the Asian American vote, they could be doomed in the polls.

This statement held true in the 2012 election when president Barack Obama succeeded in getting over 70 percent of the Asian vote. Recently, Chinese Americans have been more inclined to vote for the Democratic Party candidate than ever before. According to NPR, only about 7 percent of the Chinese American population affiliates with the Republican Party today.

With popular conservative news station Fox News treating Chinese Americans as the punchline for racist jokes, it’s not hard to see why Chinese Americans feel alienated by the Republican Party. Right now, Trump has only 19 percent of the Asian American vote. This is from a group that respects family values and favors low taxes and business-friendly government.

Whether outlets like Fox News choose to seriously cover the Asian American vote or not, their vote matters and, like every other demographic, Asian Americans will be shaping the course of our nation long after the impact Jesse Watters’ and Donald Trump’s divisive rhetoric  and tactics pass.