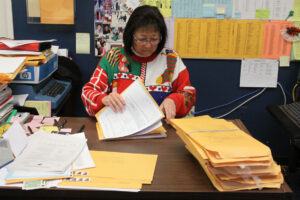 Guidance secretary Sharon Fong sorts through seniors' packets before mailing them off to colleges.

As the holidays approach, some seniors are looking forward to all the usual traditions—trees with colorful lights, gingerbread cookies with warm milk, red-nosed reindeer and a much-awaited envelope in the mail with a college admission decision.

As the holidays approach, some seniors are looking forward to all the usual traditions—trees with colorful lights, gingerbread cookies with warm milk, red-nosed reindeer and a much-awaited envelope in the mail with a college admission decision.

For students who applied early, this will mean either acceptance at their top school, being deferred until later or being rejected on Dec. 15. Last year, 54 students applied for early admission; this year 72 students have applied early.

Students who decided to apply early said this was a way to tell the colleges they were their first choice.

Senior Madeline Renalds applying early action to Georgetown as a way of easing the pressure of the admissions process.

“I’m really excited and a little bit stressed because it’s a countdown,” Renalds said, “I think about it everyday and I hope it’s there in my mail on December 15. If it’s not, I’ll be mad.”

Why are so many seniors applying early? Assistant principal Brian Safine points to insecurity over weak economy as well as how competitive college admissions have become. In the past 30 years, the number of applicants to CSUs, UCs and Stanford have doubled.

“I try to show parents [the acceptance rates] to show that it has gotten a lot harder to get into the college of their child’s choice since their time. Even in the past 25 years, it has drastically changed,” Safine said.

This year, more students are not only applying early but also to more private schools. Around 250 students applied to private schools last year, while this year the number seems to be reaching 300.

“Even though there are rumors flying around about how students aren’t getting in––when looking at our numbers we see that our students are doing just as well, if not better,” said Safine.

For seniors in the middle of the college application process, many believe the competition for UCs is getting tighter, as colleges, such as UC Berkeley are proposing to stray away from the master California Education plan, which involves giving priority first to community college transfers and then to students from California high schools. Student fear that UC Berkeley wants to start admitting more out of state students—who pay higher tuition fees—to help the deficit in their own budget.

“I think the application process is really stressful––especially for UCs because almost all students from California apply to these schools,” said senior Alysia Patel. “If the UCs start cutting down the number of in-state students they accept, it adds on so much more competition for the senior class.”