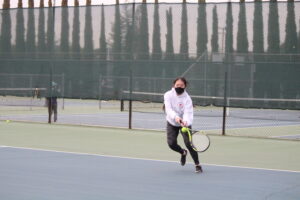 Senior Amanda Zhu runs to hit the tennis ball during practice on the school tennis court.

Athletic director Tim Lugo walked out onto the pool deck to see swimmers greeting him with smiles and air hugs from 6 feet away after swim tryouts on Feb. 1. He recalls one student cheerfully saying, “This is the first time I’ve been back on campus since we shut down.”

Lugo said he’s happy to see students back on campus and competing again.

“If we can provide some sense of normal by getting [students] back into sports, away from a screen, out of the house, being able to see friends again, even if it’s 6 feet away, I’m excited about it,” Lugo said. “I’m going to go watch as many events as I possibly can right now, because I’m excited to see kids back.”

Sports practices had been going on either only periodically or canceled entirely since last March.

In January, the California Interscholastic Federation (CIF) announced sports would return based on each county’s current colored tier and adjustments have occurred since then by Gov. Gavin Newsom, most of which make it easier for teams to compete.

“We are very excited to get the players out on the court,” said Benjamin Brotzman, who coaches the JV girls’ tennis team. “This is giving [student athletes] a much-needed opportunity to see some peers and play some matches that are getting them active and out of the house. The interaction among students brings smiles to faces, even under the masks.”

During what is now called Season 1, all returning sports, including boys’ and girls’ cross country and swimming, girls’ golf and girls’ tennis, are allowed in the purple tier, indicating that they are relatively low-risk if practiced outside.

According to Lugo, the county has said there is no prescribed limit on team sizes; however, it is recommended that the team size is kept practical for the sport to limit COVID-19 exposure risk, so some sports this year will have smaller rosters than they normally do.

Cross country, one of the first returning sports, has already needed to make cuts, as only seven kids now run per event for each level. The sport typically had around 30 on the boys team and anywhere between 40-60 on the girls team, but will have fewer than 20 boys and 20 girls this year.

“We’re going to do what the county recommendation is,” Lugo said. “And I know that’s caused some people some frustration, that we might have to cut kids who are excited to come back, and it sounds mean. It’s not something the coaches want to do, but they also want to be safe.”

Lugo stressed the school wants to avoid positive test results and take immediate measures in the event of an outbreak.

“The challenge is going to be navigating any potential COVID-19 risks, and mitigating those,” Lugo said. “If an athlete or parent tests positive, [the important thing will be] trying to get the contact tracing started, and maybe having to shut groups down.”

To try to prevent sports participants from contracting COVID-19, safety precautions will also be enforced. Students must wear masks at practice (except for aquatic sports), coaches must do routine check-ins with athletes before each practice and parents must check athletes’ temperatures at home and pick students up within 10 minutes of practice ending.

Athletes are also bringing their own water bottles, as the school can no longer bring down the water jugs like they’ve done so in the past. Additionally, the school has asked that students bring their own equipment in their athletic bags to try to eliminate the potential risk of cross contamination.

The school will provide as much as they can to keep kids safe, Lugo said. Hand sanitizer will be provided at all practice sites, and if a student shows up without a mask, coaches will have extras to give out.

“The extent to which the coaches went through to make sure all players would remain safe and secure with regards to COVID safety really presents a feeling of safety for all players and coaches,” Brotzman said. “Additionally, tennis happens to be a sport that is naturally socially distant, so that helps.”

Despite these safety regulations, the pandemic also affected coaches and staff members concerned about their own safety, prompting some to sit out on coaching this year.

Danny Moon, the longtime girls’ cross country coach, is at high risk for COVID due to his advanced age. Despite not being able to interact with students directly, Moon still helps with setting up equipment, finishing off paperwork, and completing behind-the-scenes tasks. Coach Ian Tippetts and co-head track coach Archie Ljepava will be on coaching duties for girls’ cross country.

Lugo said that the school does not want to push the coaches into thinking that they are forced to participate in the optional in-person training for their sports teams, and that they should return when they are the most comfortable or when the county is in the orange tier.

In addition to these changes, coaches are learning to coach differently. Lugo told coaches that it’ll be like their first year of coaching all over again. When setting up drills, they will need to keep physical distancing in mind, and figure out where to position themselves so they are away from their athletes.

“I’ve been coaching football since June and I’ve kind of figured it out now, but it was different at first,” Lugo said. “In drills that we do, I’ve had to position myself in different places, and rethink how we do things, which drills work and which ones don’t. I feel like a rookie [coach this year, and it’s been crazy].”

The short seasons and no playoffs will also pose challenges. According to Lugo, many coaches have said they will not be able to get athletes into full competition shape before games begin, so coaches this year are focusing more on safety and getting athletes as prepared as possible under the circumstances.

“Starting a season like this is odd, but only in its length,” Brotzman said. “[Abiding to COVID-19 guidelines while playing]  tennis is less difficult than we expected. So, time that it takes to work players up to match ready is our only difficulty. I would want much more practice time to hone the skills before matches begin.”

Looking ahead to competition season, the issue of having people in the stands has become a point of contention within the league. While the county is in the purple tier, the county has recommended only age appropriate supervision, especially addressing youth sports where it is important for parents to be present if their children get hurt.

The policies for whether fans are allowed in the stands will most likely be site specific, depending on what the school principal decides. According to Lugo, principal Greg Louie is OK with parents watching their kids compete as long as they wear masks and socially distance in the bleachers.

In addition, the school is asking that parents drive their children to events to reduce transportation costs and potential contamination problems.

“We’re talking tens of thousands of dollars that we just don't have for busing,” Lugo said. “The issue is that if we’re asking parents to drive, how do you tell them they can’t watch their kid compete? So we're still working our way through that.”

Although there are still problems to be solved and challenges to overcome, coaches and student athletes share the excitement of being back on campus competing. For Lugo, this return to in-person practices finally brought back one of the aspects he enjoyed most about high school sports: Being able to interact with the students.

This type of connection between teammates is common among Saratoga High athletes. One of the students’ most powerful incentives to come to in-person practice is to see the friends they made previously on the team, and everyone has been more than willing to look out for their friends and to keep each other safe, Lugo said.

Lugo is excited that sports have resumed and wants to make the best of the situation for student athletes.

“If I can give these kids something that resembles normal, I’m excited to do that,” Lugo said.