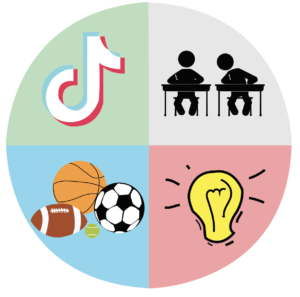 Stereotypes of each grade level influence teacher’s perceptions of students and only typify certain students in each grade.

“You’re like the freshmen. The only dancing you’re good at is in TikTok videos!”

This was one of many lines  seniors delivered during their Homecoming Quad Day skit. During Homecoming week, the four grades took turns teasing other grade levels, including jokes about sophomores constantly cheating on tests,  juniors stealing senior parking spots and seniors being forgettable.

Every class has garnered an image of themselves, whether through Homecoming performances, scandals or other notable events. These stereotypes influence the way that other grades think of them, leaving some students feeling misrepresented.

“We have a cheating image, especially because of what happened with Mrs. Nicholson last year,” sophomore Theresa Parsons said.

Last year, as freshmen, multiple Class of 2022 students were caught  cheating in various classes. The most prominent incident was when a student stole a set of test answer keys off biology teacher Kellyann Nicholson’s desk and shared it with classmates. Another case occurred when students cheated on tests in health and driver’s education teacher Amy Obenour’s class.

Parsons believes that her class’s reputation for widespread cheating is relatively accurate. On the other hand, sophomore Arika Raha believes that the stereotype misrepresents the grade.

“I don’t think the stereotype is that accurate because the cheaters are just a small group of people,” Raha said. “Not the entire class.”

Junior Isaac Sun said his class has a stereotype that they tend to slack off and are lazier than the other classes. Sun also believes the junior class is known to be “ordinary” and “mediocre.”

Others agree that juniors are a mediocre class.

“I always thought the junior class was kind of in the middle,” junior Daniel Izrailevsky said. “For example, we don’t have the connotation that we’re super smart, like the senior class.”

Some believe that the junior class has a reputation of being good athletes, possibly because there are many juniors in more “high-profile” sports such as football and basketball.

“In terms of sports, the junior class has a reputation of being pretty solid,” said Izrailevsky. “But other than that, we’re not really that special.”

A stereotype that the senior class has is that most members are extremely intelligent. With their record number of 51 National Merit semi-finalists, rigorous course loads, high GPAs and string of recent top college acceptances, the Class of 2020 has gained the reputation of being the smartest class that the school has seen in a long time.

“A lot of the senior class is naturally talented,” senior Brian Zhu said. “But on top of that, many seniors also have a really competitive spirit.”

Because of this well-known stereotype, perceptions by teachers and students alike on campus of seniors have shifted slightly. Some students feel that there’s a  higher expectation for the seniors compared to other grades because of their reputation.

“I feel like there’s a different expectation for seniors compared to juniors,”  Izrailevsky said. “For example, people will often use the fact that someone is in the Class of 2020 to justify their achievements or successes.”

Freshman Arshi Chawla said that there is a stereotype that the Class of 2023 is annoying and loud, which she thinks is making teachers of higher grade levels “dread having to teach the freshmen.”

However, it seems that this stereotype is not extremely well-known, as many students who are not freshmen are unaware of any stereotypes that the class has.

“The freshmen are too new to this school, so I don’t think they’ve made a big impression as a whole yet,” junior Sumhitha Malladi said. “They haven’t had an event that people label them by yet this year.”

Parsons agrees that these stereotypes can affect classes as a whole as it influences the way that teachers see them.

“The cheating stereotype makes teachers more suspicious of us, and I feel like there’s some trust issues there,” Parsons said.

Despite the prevalence of these stereotypes, they are never wholly true.

Malladi thinks that stereotypes merely embody the more well-known people in each grade, while most individuals in each grade are being misrepresented.

“There are definitely a lot of freshmen who misbehave based on what my teachers have told our classes,” Chawla said. “But I think the assumption that all freshmen are annoying isn’t accurate.”

Regardless of how widespread these stereotypes are, they still are not very good at representing each class as a whole.

“There’s always some level of truth to stereotypes,” Izrailevsky said. “It’s like the back of a book. It just gives an idea of the group of people.”