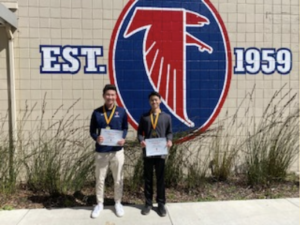 Permalink
Beyond academic achievements, seniors Marcus Kuo and Andrew Cheng are also highly involved with the school, including through the music program

The school recently announced seniors Marcus Kuo and Andrew Cheng as the Class of 2022 valedictorian and salutatorian, respectively. They received these honors because they have the highest GPAs in the senior class.

Kuo, holding a 4.60 GPA , has taken a total of eight honors courses and 10 AP classes at the school. Kuo is also the captain of the school’s varsity water polo team and is a violin player in the Saratoga Strings and the Saratoga Symphony Orchestra.

Cheng has a 4.54 GPA and has taken a total of 14 honors and AP courses. He plays piano competitively and plays the violin in the Saratoga Music Program alongside Kuo.

Both said that they were surprised when principal Greg Louie called their parents with the announcement of valedictorian and salutatorian, but felt happy nonetheless.

“The best part was telling my family members from Taiwan, especially my grandma,” Kuo said. “Because a big part of school in Asia has to do with your ranking, they were super excited to hear the news.”