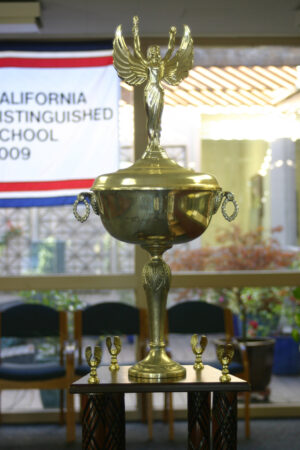 In an effort to improve school spirit, the ASB along with the spirit, rally and spring fling commissions have brought a little bit of Hogwarts magic to SHS by introducing a “class cup” to foster friendly competition between the classes.

In an effort to improve school spirit, the ASB along with the spirit, rally and spring fling commissions have brought a little bit of Hogwarts magic to SHS by introducing a “class cup” to foster friendly competition between the classes.

Dev, along with ASB president David Mandell, drew their inspiration for the cup from “Harry Potter,” the popular series in which the different “houses” compete to earn points for the house cup at the end of the year. In keeping with this theme, rally commission constructed a 6-foot cup from old school trophies on which the winning class’ name will be inscribed.

“We knew that the first rally was going to be Harry Potter themed,” said Dev. “We thought introducing the class cup at the rally would be a good idea.”

Spirit commissioner Shir Nehama believes that the friendly competition over the cup will increase school spirit.

“I think that everyone has that competitiveness inside of them and they want to beat the other classes just like in Homecoming, so people have a motivation to dress up other than it just being fun,” said Nehama.

The main concern so far is that not many people are aware of the class cup competition.

“Since it’s new, people aren’t really getting into it yet,” said Dev. “But hopefully once it gets further into school and points start tallying up, people will become more aware of it.”

The trophy is located in the office, along with four jugs filled with marbles representing the number of points each class has. Before points from homecoming were added, the seniors were in first place with 81 points, followed by the juniors with 70, sophomores with 55 and freshmen with 33.

Classes can earn points through various spirit-related activities. Winning games at rallies, Homecoming participation, dressing up for spirit days, participating in school activities and showing class spirit on rally days are just some of the ways to earn points for the class cup.

According to Mandell, anything related to school spirit can earn points toward the class cup, which are tabulated by the ASB, and rally and spirit commissions.

This new system does not mean that the seniors have a guaranteed win, however. The point totals are carefully judged and added so that the seniors will not have an automatic advantage over the other classes, Mandell said.

“In previous rallies, seniors would always win,” said Dev. “This year we have to be careful about letting other classes get a chance.”

Dev anticipates that as it gets closer to the end of the year, more people will know about the class cup.

“It’s still kind of under the radar,” said Dev, “but hopefully we’ll get there.”

Despite its lack of publicity, Nehama has noticed an increase in spirit after the introduction of the class cup.

“I’ve definitely seen an increase in spirit,” said Nehama, “particularly the red pride for our Los Gatos game and our College Apparel Day where we had over 400 kids dress up, which is a huge step up from where we were.”

Mandell is also optimistic about the success of the cup in boosting school spirit.

“This is the first year we’ve done the class cup so it’s sort of like a trial run,” said Mandell. “I think it will help our classes get more involved, which is something we’ve lost sight of over the years.”