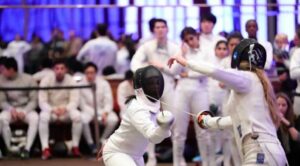 Jobalia spars with a fencer from Columbia University at a tournament from November 14, 2019.

As Class of 2019 alumna Sasha Pickard stepped on the field for her first collegiate game, one that pitted the Crimson Tide against the University of Arkansas, her past decade of her hard work had finally paid off — she was a D1 athlete.

In 2018, the fall of her senior year, Pickard committed to Alabama’s women’s soccer team as a center back, the same position she played in high school. Outside of high school, Pickard also played for the Mountain View Los Altos (MVLA) Soccer Club, a member club of the Elite Clubs National League (ECNL).

Since then, she said she has greatly enjoyed playing at Alabama. Despite the demands of the sport both on and off the field, she said the experience is “so rewarding” and enjoys being “a part of such a great athletics program.”

Since joining the team, Pickard has improved tremendously as an athlete. According to the University of Alabama Roster, Pickard began her freshman season in 2018 playing around 14-39 minutes in each game. Now, in her sophomore season, in recent games she has played 90-93 minutes of each game. In her two years, she has also scored three goals.

The transition to college athletics was initially very difficult for Pickard as she had to learn how to juggle school work with a demanding practice and game schedule. The team traveled once a week, and since they left a day before their game, Pickard would miss two out of five school days. Even with the pandemic, the Alabama soccer team has a full spring schedule, playing 9 total games.

“I had to work a lot on my time management and communication with my professors, but the athletics program helps a lot by requiring weekly study hours and having other resources available,” Pickard said.

She said playing for the school team prepared her to play at the collegiate level because high school soccer helped her become a “tougher player” who could meet the physical demands of the Southern Eastern Conference (SEC).

“In high school, all I really had time for was homework and fencing, and I had to get good at figuring out the most effective ways to study in the little amount of time that I had,” she said.

Jobalia said she has cherished her experience at NYU so far because of the many close friends she has made on the fencing team. She enjoys traveling together for meets, a welcome change from high school, where meets were individual.

“Fencing at these college meets has been really fun because you get to watch your teammates fence and vice versa, so you can all support each other and help each other do better,” Jobalia said.

Just like most college athletes, Jobalia had to overcome the learning curve that came with the intensity of both college classes and college athletics.

She has often had a lot of homework or a midterm the day after a meet, but she has found that reaching to professors for adjustments or support helps her manage her workload.

Jobalia said her favorite memory from NYU occurred last season when she won several bouts against fencers she had previously lost to. In that moment, she realized how much progress she had made.

She won most of these bouts in “sudden death” overtime: One player receives random priority, and if no one scores a touch during the game, the player with priority wins the bout. After a 6-hour drive back to campus, she and her teammates were exhausted and decided to order Taco Bell.

“It was undoubtedly the best tasting Taco Bell I have had,” Jobalia said.

Jobalia advised athletes seeking recruitment to stick with a sport if they truly love to play. Although time management may be difficult, she said it won’t be a new experience to most Saratoga athletes.

“There’s no better college experience than playing your favorite sport with your friends,” Jobalia said.

Pickard said prospective athletes should reach out to coaches as soon as possible, join a travel team and attend showcases to meet with recruiters. Most importantly, she said that it’s crucial to find a school that the athlete really loves.

“It’s student-athlete, not athlete-student — your priority should be finding a place that meets all of your academic, social and athletic expectations,” Pickard said.