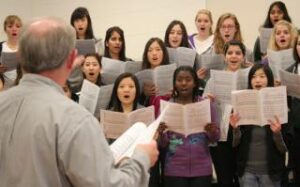 More than 250 singers from the Lynbrook and Saratoga High choirs joined together in harmony on Feb. 24 in the McAfee Center. The two choirs performed a few songs separately, then finished together with Franz Schubert's "Mass in G", accompanied by Lynbrook's Chamber Orchestra.

More than 250 singers from the Lynbrook and Saratoga High choirs joined together in harmony on Feb. 24 in the McAfee Center. The two choirs performed a few songs separately, then finished together with Franz Schubert's "Mass in G", accompanied by Lynbrook's Chamber Orchestra.

"'Mass in G' is one of the most familiar 'classical' choral pieces performed the world over combining both choir and orchestra," said choral director Jim Yowell. "The beauty of this work has inspired movie directors to incorporate some of the music in their movies and even background to present day commercials."

Although the piece was composed in only four days, "Mass in G" is not a short piece.

Said sophomore soprano Sophia Wang, "The song is really long, and it seemed hard at first. But once I learned the music, I realized that it's actually pretty easy."

"It was pretty nerve-wracking," said Head. "I didn't just have to sing well for my own sake; I felt like I represented the program as a whole."

At the concert, Lynbrook's Chamber Orchestra performed first, then Saratoga's Concert Choir, followed by the Lynbrook Choir. Finally, all three joined to perform Schubert's Mass in G. The entire piece came together with only a one and a half hour practice with Lynbrook the day before the concert.

"Generally, it went pretty well, considering that we only practiced with them once ," said sophomore alto singer Courtney Hsu. "However, I felt like we should have talked to them for a few minutes first so that we could get to know [the Lynbrook students] better."

The idea to hold a collaborative concert with Lynbrook was suggested by Yowell for a number of reasons.

"This was a good way for students to share their love of music," said Yowell. "And at the time, our school orchestra was busy, so I asked the Lynbrook orchestra if they would like to perform with us. They were delighted with the offer."

With three different music groups performing together, the concert attracted a larger audience than usual.

"Lynbrook had a lot of people in their choir, which made it kind of overwhelming," junior tenor Cid Diaz said. "But it ended really well, and I think everyone enjoyed the concert."