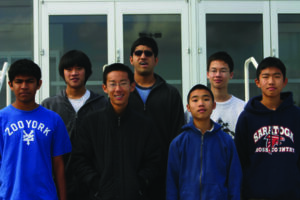 Late into the sixth and final round of the 35th Annual CalChess State Scholastic Championships, the Falcon chess team knew that their bid for a sixth straight state championship would almost certainly end in defeat.

Late into the sixth and final round of the 35th Annual CalChess State Scholastic Championships, the Falcon chess team knew that their bid for a sixth straight state championship would almost certainly end in defeat.

Although the Falcons were leading rival Mission San Jose by 0.5 points, with the teams having scores of 15 and 14.5, respectively, all of their players were done with their matches, while Mission still had three players remaining with unfinished matches.

But all three Mission players lost, and Saratoga walked away with yet another first-place trophy.

“If any of them had won, they would have beaten us. We were really lucky that they all lost,” said sophomore player Evan Ye.

“When we won, I felt a mix of exhilaration at our victory, relief that we would not be the ones to end our streak, and amazement at our luck,” said Ye.

The Swiss tournament, so named because players were randomly pitted against opponents from other schools, added the top four individual scores from each team for the team score, which for the Falcons came from Wai, with 4.5, Sun, with 4.0, Garbe, with 3.5, and Wu, with 3.0. A win counted for 1.0 point, a draw counted for .5 points, and a loss counted for 0 points.

Coming into the sixth round of the tournament, Saratoga was tied with Mission, with each school having a score of 13.0.

The Falcon’s sixth straight championship means that out of all of the players, only Charles Sun played at the 3rd state championship win in 2007––a testament to the remarkable longevity of the chess team’s success.

Considering that the team will only graduate two seniors next year, the possibility that the Falcons could collect even more championships in the future remains strong.

“It’ll probably be a bit harder to win again next year since we are going to lose Charles and Rolland, but we are definitely determined to continue our winning streak,” said Ye.