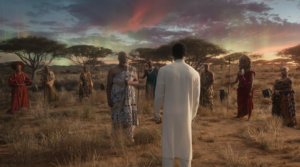 Boseman may have passed away, but his legacy will live on forever.

Discontented, T’Challa tells the other ancestors, who are previous kings including his father, that his time on Earth is not done and that he has loose ends he must tie up. In the movie, T’Challa returns to life triumphantly. In real life, however, Boseman has tragically been lost at far too young.

Boseman died on Aug. 28 at age 43, of stage 4 colon cancer with his wife and children by his side. According to his family, Boseman had been diagnosed with stage III cancer in 2016 but chose to keep his diagnosis private.

Despite battling a severe form of cancer and accompanying treatment, Boseman kept acting in his last few years. He filmed multiple major movies after learning of his cancer, including Marvel hits like “Black Panther” and “Avengers: Endgame,” as well as “21 Bridges.” Boseman also visited many kids battling cancer while battling it himself.

Boseman was last seen in Netflix’s “Da 5 Bloods” and his last filmed appearance, posthumously, will be in Netflix’s “Ma Rainey’s Black Bottom.” Boseman was slated to appear in Marvel’s “Black Panther 2,” and, according to The Hollywood Reporter, he believed he would live long enough to make the film until a few days before his death.

Respected and loved by many, Boseman has left a huge impact on the world. Fans from all over the globe mourned the loss of an actor who played historic roles such as Jackie Robinson in “42” and changed Hollywood as the first Black superhero in the Marvel Cinematic Universe with “Black Panther.”

“When I learned Chadwick had died, I didn’t know if it was real or not,” sophomore Taylor Wilson said. “I was just really disappointed and sad. He meant a lot to [the Black] community.”

To many, Boseman wasn’t just an actor, but also an icon. “Black Panther” was one of the first high-budget movies to focus on an advanced African nation, instead of the more common Oscar-winning movies about slavery and oppression. “Black Panther” grossed $1.29 billion in theaters and is the 10th highest grossing movie domestically ever.

“Chadwick having such a huge role and finding huge success made us all proud and inspired us to one day become like him,” Wilson said. “His legacy means everything to me.”

Boseman will forever be remembered for not just his successful acting career, but his contributions to the world and society. Delivering some of the best acting performances of the decade in his few years, he created new ground for Black representation on screen.

“For decades the big screen has been dominated by white actors who are amazing in their own right, but it has largely lacked racial diversity,” said senior Ajay Gupta. “Hopefully Boseman's impact can buck this trend, causing more amazing Black actors and actresses to get a chance to shine in movies in ways the world hasn't seen before.”

Boseman may no longer be with us, but his legacy will stay a part of this world forever. Though his time had been cut tragically short, his impact was extraordinary.

Chadwick, you can now join the ancestors. Rest in peace.