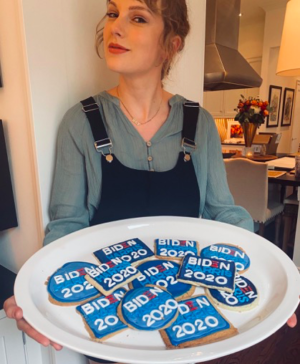 Given that they have the opportunity to reach millions with their posts, tweets, and words, it is their duty to speak for what they believe in.

On Oct. 7, award-winning singer Taylor Swift tweeted about an interview she did with V Magazine’s “V is for Vote” campaign on why she would be voting for Joe Biden and Kamala Harris. In the tweet, she included both the magazine cover and a picture of her with a tray of “Biden Harris 2020” cookies.

The majority of the comments on her post bashed Swift for being so vocal about voting for Biden. Many stated that celebrities were arrogant narcissists and “emotional children.”

Another comment stated, “I am genuinely interested why anyone would care what Taylor Swift has to say about elections … or any celebrity for that matter. Especially when they’re not educated in politics, or experienced living on the breadline?”

These reactions are hardly unique. When celebrities endorse a politician or speak out about social injustice, they frequently receive a backlash, essentially being told to “stick to what they’re good at,” whether that be singing, acting or playing a sport.

But just because a person has devoted their life to athletics or the arts doesn’t mean they should swear off having political views. Critics who knock celebrities for having options would never think twice about lawyers, doctors, teachers or farmers expressing themselves.

Then there is the question of influence. Swift has 87.2 million followers on Twitter and 140 million followers on Instagram. On average, her posts gain around 3 million likes. With such a big following, Swift has the ability to reach people who never follow the news or care much about critical issues such as climate change.

In truth, celebrities are just citizens like the rest of us, and we should encourage civic engagement as much as possible, not discourage people from being “too political.”

It only follows that celebrities should be active in encouraging people to vote. In the 2016 presidential election, 46.1 percent of 18- to 29-year-olds voted, compared to 70.9 percent of 65-year-olds and older. Given that most celebrities’ fans lie in the former age range, convincing young people to go and vote has the potential to make a huge difference in elections.

In a time where the fate of our country will be decided on Nov. 3, voting and being politically active is one of the most important things you can do as an American citizen. We can’t get mad at celebrities doing their part.