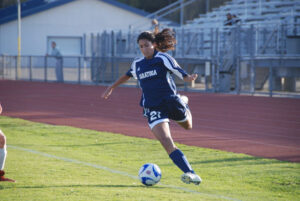 Senior Adele Perera moves down the field in a game against Santa Clara on Feb. 11.

The girls’ soccer team had one goal for this season: to improve from last year. Not only has the team accomplished this goal, but they have exceeded it by making it all the way to the CCS quarterfinals.

Saratoga, ranked lowest in CCS, lost a close quarterfinal game to No. 1 ranked Scotts Valley on Feb. 27. The teams tied 0-0 in regulation play, and the score remained tied throughout overtime. The game went to penalty kicks, and since Scotts Valley scored all five of its penalty kicks, one more than Saratoga, they moved on the semi-finals.

Despite a disappointing end to a close match, the Saratoga underdogs were proud to have kept such a close game to Scotts Valley.

“We couldn’t have played better—it looked like the No. 9 team was going to upset the No. 1 team,” said head coach Kim Anzalone. “These girls just played their guts out.”

Scotts Valley had a strong offense, but Falcon defense, headed by senior co-captains Sarah Guy and Sam Li, was able to hold them to few shots on goal.

“We kept up with and pressured a team that is used to winning and we had them nervous by the end,” said Guy.

In order to make it to the quarterfinals, the Falcons defeated Santa Catalina in the first round of the CCS playoffs on Feb. 27 in Monterey. Sophomore Courtney Brandt scored early in the first half off an assist from senior Adele Perera. Brandt also put in another goal in the second half off a pass from senior co-captain Jordan Leonard. Senior co-captain and goalie Jan Iyer was a key player in preventing the attacking Santa Catalina from scoring with several big saves.

Despite falling just short to making the semi-finals, the girls gave Scotts Valley players a run for their money and completed a thrilling season.

“They put in everything they had,” said assistant coach Brandon Chow. “You can’t ask much more from the players.”