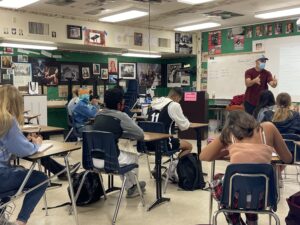 Those words came from new English teacher Marcos Cortez earlier this spring as he stopped a nearby student and asked for directions to the classroom of his partnering Media Arts Program teacher Mike Davey. Cortez had met with Davey dozens of times online, but never in Davey’s classroom. Since the start of phase 3B, panicking freshmen and new-to-campus teachers and staff have been orienting themselves as they would have done in August in an ordinary year. Despite the school year quickly coming to an end, many on campus still struggle to get to their destined class on time, including teachers.

Cortez, a longtime educator who had taught at Los Gatos in recent years, described his experience coming to campus as “sort of like going on a field trip” because he is still working and surrounded by people he has known for a long time, but in a whole different environment.

“I was excited, I was anxious, and I was nervous,” Cortez said. “It was such a unique feeling to have spent so much time with my students and know them really well, but have only been in my physical classroom [a few times].”

While preparing himself for hybrid learning, Cortez tried to tone down expectations. He was surprised to see the level of engagement that was maintained, if not increased, by those staying online, despite his initial concerns that he was going to “lose” them with students learning in the classroom.

To keep both the online and in-person students engaged, Cortez flips his laptop’s camera so it captures the majority of the classroom, allowing himself to walk around while teaching instead of sitting down for 75 minutes straight.

For Bryan Ringsted, a first-year drama teacher, coming back on campus drastically changes how students prepare themselves for his classes.

While working on the production of “The Addams Family,” Ringsted has started his classes with an in-person improvisational theater game to loosen students up before rehearsing for final projects. One of his biggest problems is attempting to manage the tech when matching the remote and in-person group, though he is fairly confident in his abilities to adapt to this challenge.

“I’ve been teaching multiple sections in the same class for years, so differentiation of instruction is old hat,” Ringsted said. “It’s good to be back. As a theater teacher, my art form is, by definition, live, something that is drained from online classes.”

With students coming back to school, surprises are frequent. For example, Cortez was startled at how different students looked in person rather than on-screen; some appeared to be taller than expected, while some were unrecognizable because Cortez could only see a portion of their forehead in online classes.

“I think it was really funny how some of the same stereotypical student behaviors in class, like students sitting in the back, came right back,” Cortez said.

Cortez found himself struggling with audio issues on Zoom while also teaching in-person: It’s hard for students online to hear when an in-person student speaks up in class. To mitigate this issue, he is getting a new microphone which he will place in the center of the classroom, in hopes that it will transmit students’ voices better.

For the remainder of this school year, Cortez prefers to keep the hybrid model as it gives him an opportunity to interact with some of his students.

“I think the social component is important at this moment,” Cortez said. “The hybrid model is great for social and emotional support, but it is not the most effective for [students] to learn.”

However, if he had to teach with one model indefinitely, he would choose either completely remote or completely in-person, with part of the reason being because hybrid teaching is “exhausting and one of the most challenging teaching environments” he has ever taught in.

This level of challenge reminded him of his experience teaching on a ship several years ago. He was a humanities teacher and would voyage with his students for six weeks to the Eastern Carribean, where students were required to take their normal classes while learning how to operate the ship with the professional crew, which Cortez was part of. The entire process was described as extremely physically and emotionally challenging, similar to hybrid teaching, but rewarding as well.

“The moment when I felt blessed, really, was the first time that I heard laughter in class,” Cortez said about his return to in-class teaching.