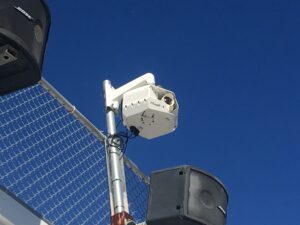 Photo by Jonathan Si
A Pixellot camera installed at the lower field.

Permalink
The cameras are artificial-intelligence based and are installed in the lower field and gym, enabling the school to offer live-streamed sports coverage.

Eighty miles away, in the comfort of her own home, Toni Matos, mother of football head coach Stephen Matos, was able to cheer on her son’s team with her family as they watched the school’s football games live on television. Since September 2022, she has subscribed to the National Federation of State High School Associations (NFHS) network, attending our school’s football games in their very own virtual bleachers.

“It was the next best thing to being there in person,” Matos said.

Starting in 2020, the school has partnered with the NFHS to provide a subscription-based live streaming service that allows families to watch games at home. Users pay $79.99 for an annual subscription or $11.99 for monthly.

Athletic director Rick Ellis said that the school does not get a cut from the subscription payment, but NFHS does “supply the school with cameras, upkeep, and gives us a school subscription.”

Currently, cameras are installed in the lower field and gym with coverage for football, basketball, volleyball, soccer games and wrestling matches. Ellis also said that the school is looking to install cameras to capture baseball and softball games on those fields in the near future.

These cameras are provided by Pixellot and are automated to follow the ball as the sport is played without the need of a cameraman.

While the school can only stream home games, principal Greg Louie said the service is offered widely, with many schools having also installed the cameras and live streaming, allowing for families to watch both home and away games.

As far as how well the cameras work, Ellis says there will inevitably be some glitches in the technology. Because it is relatively new and the automated process allows for less maintenance, there is a chance that the cameras may not pick up all the action.

“(During the season) when we had an injury on the field, there were some kids playing with a ball off to the right and the camera kept panning to them,” Ellis said. ”It was just picking up the ball, so there are little things like that that still aren’t perfect.”

Another problem with the service comes with the livestreaming itself. Matos commented that the service didn’t follow the plays well and updated scores were very delayed throughout the game.

Apart from live streaming, NFHS also provides videos on demand (VOD) because it is used by a company called HUDL, which provides a platform allowing videos of past games to be uploaded and reviewed. According to assistant football coach Archie Ljepava, the football team uses the videos to help review previous games.

However, Ellis noted that these videos are not being used to review plays during situations that include controversial calls or last-second basketball shots.

Currently, the service is mostly used to watch football games, averaging  around 44 views per live stream and 22 views per VOD.

Although the service does allow families to watch games virtually, Ellis emphasized that he still wants people to try and come to the physical games.

“There are families whose parents might go on a business trip overseas and want to watch their children’s games,” Ellis said. “We’d like to be able to supply that for them, but I think those are more anomaly situations, not general.”