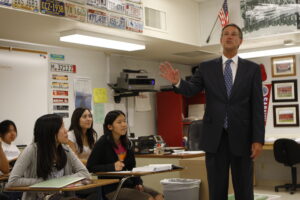 SHS earned the status of “California distinguished school” for the 2009-10 school year. O’Connell happened to be in town because of an event honoring Teachers of the Year at a San Francisco Giants game the night previously and decided to stop by.

To unknowing students who were hanging around school during 7th period O’Connell’s entourage was an eye-catcher.

“Mr. Bosco and Mr. Anderson and a bunch of other people were around [O’Connell]. I thought that he was someone famous or a celebrity or something,” said senior Kandice Wong. “I didn’t know that he was the California State Superintendent.”

During his visit, O’Connell dropped in on AP US History and World Geography teacher Matt Torrens’ class to get an example of why Saratoga is a distinguished school. Students thought that he was dropping in to observe quietly; however, when he entered the classroom, the fact that he was not going to simply sit in the corner and watch quickly became apparent.

Noticing Torrens’ newspaper clipping regarding the death of Senator Edward Kennedy, taped to the whiteboard, O’Connell spent the majority of his classroom visit speaking of how he had met all three of the renowned Kennedy brothers at one point in time. Ten minutes following his entrance, his manager told him that they had to leave, and he did, reluctantly.

“It was really surreal, especially when he was shaking my hand,” said junior Nick Yamamoto, a student in Torren’s 7th period AP US history class. “He came, and spoke, and then he left. I really enjoyed his stories, though. He was a teacher and actually taught history himself, and it was just really rewarding overall, and I’m glad that I was allowed this opportunity to sit and listen.”