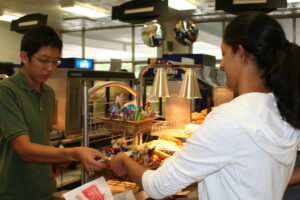 Every year, the school experiences many changes as the year opens: new classes, new buildings and new faces. This year, the cafeteria joined the list of changes by reorganizing and adding to its selections. The main change students notice is that lunch lines are now separated into five categories: salads, fast takes, creations, pizza and grill.

Cafeteria staff believe the lunch process is now more efficient and hope to attract more students to stay on campus.

Although lines were a little longer during the first few days of school, the cafeteria is now well on its way to serving more types of food faster.

“Right now, we have two people trying to serve up pasta [in the creations line] as fast as they can, but it’s not going to always be that way,” said chef Diane Ray. “Some people don’t like the Chinese food or the Mexican, but the pasta seems to be a hot seller, so we’re working on getting it faster.”

Although the cafeteria, now named Crossroads Cafe, is streamlining the method of serving food, it is still run by the same company.

Despite all the hard work, students have differing opinions on the new shape of the cafeteria lines.

“With the lines organized by type of food, I’m forced to decide what I want to buy beforehand instead of being able to choose while I’m in line,” said sophomore Kevin Chen.

Another change to the cafeteria is the addition of paninis, a toasted Italian sandwich that includes rosemary fococcia, turkey, salami, Swiss cheese, spinach, tomato and honey dijon mustard. Paninis, along with grilled cheese sandwiches, are now available in the grill line at the snack window for $4.50. But the cafeteria did not always sell so many types of food.

“We used to serve only hamburgers, pizzas, corn dogs and burritos. That was it. Food has really changed over the years,” said Ray.

This year, one of the main goals of the cafeteria is to encourage students to stay on campus.

“Students don’t have that much time to go out and get food, so it’s safer if they stay on campus and eat here. We’re also trying to make some more money because we don’t want them to close us down,” said Ray, who has been working at the cafeteria for almost 17 years. “So far, with the budget, our school is doing okay, but we’re still trying to stay afloat.”